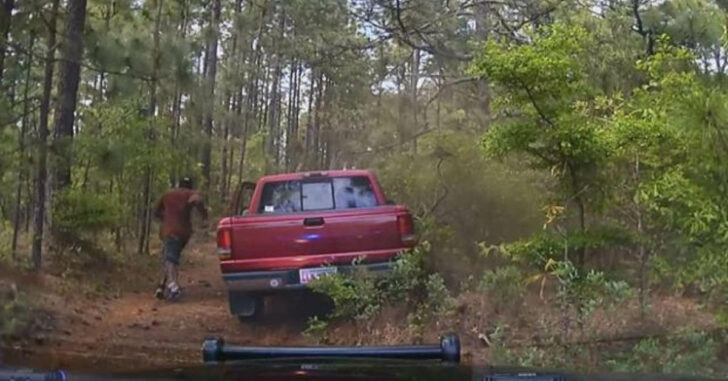 GASTON, SOUTH CAROLINA — On your own property, retreat isn’t much of an option. When a manhunt in Gaston, South Carolina, spilled over onto one homeowner’s property, he had no choice but to put a decisive end to it. Authorities saying that if wasn’t for the homeowner’s apprehension of the escapee, it would have been much harder for police to catch him.

As local station WWYF 4 reports, Lexington County deputies initially tried to pull over Joseph Drafts and his passenger who were neither wearing their safety belts. That’s when events began to spiral out of control. The driver took off and a high speed chase ensued. At one point, Lexington County law enforcement deployed road spikes to stop the driver. The tires blew out and sent the truck careening off the road. While the driver made off onto the property, the passenger stayed put and waited for police to arrive.

News had spread that the manhunt was under way. The homeowner got word before the driver of the vehicle trespassed onto his property. He reports that he was very surprised by the whole thing.

“I really just want to thank the Lord for keeping me and my family safe,” he said. “When the police told us there was a manhunt, we didn’t know if it was a manhunt because he was wanted for, you know, for what. We just knew he was in the area. We didn’t know why he was there.”

The homeowner, thankfully, was carrying his gun on him. He managed to draw on the driver and get him to lay on the ground.

“I told him to get down,” said the homeowner, a member of the National Rifle Association who holds a concealed weapons permit. “I told him repeatedly to get down and lay face down. My co-worker that had just pulled up — I turned around and yelled at him to go get the cops at the other end of the property.”

The driver complied and authorities picked him up and detained him. His charges range from trespassing to a fourth offense on driving under suspension. The homeowner’s fast thinking and his preparedness to handle the situation worked out in his advantage. He’s a concealed carry permit holder in the state of South Carolina and was able to take control of the situation quite admirably.

“I just knew I wanted to get him in a place that he couldn’t run and he couldn’t come at me or my wife,” he said.

That’s the ideal case right here, folks. And in order to get into that place, you have to be prepared by carrying your concealed handgun on you everyday, even when you go home.

Previous article: #DIGTHERIG - Paul and his Ruger P94 in a Hand-Made Leather Holster Next article: Suspect Swipes Gun From Concealed Carrier's Back Pocket