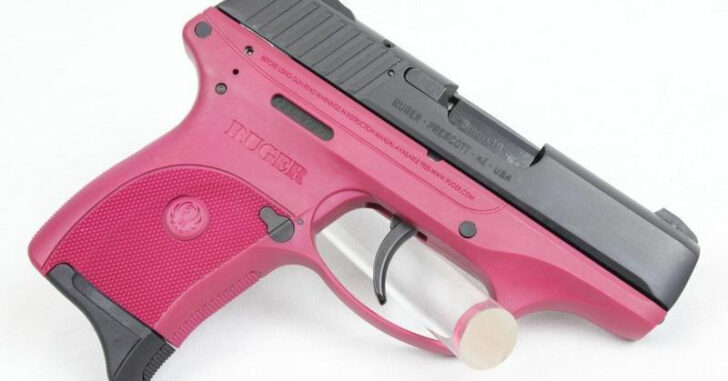 After leaving the Army, I spent a short time working as a gun sales associate at a local store. Being a veteran and having three and a half years of Recruiting experience, I fell rather easily into the sales world. Often enough I’d find myself engaged in many conversations regarding firearms and ammunition, as well as countless debates of concealed carry options and opinions.

One particular conversation I’d held on more than one occasion I found rather amusing was the many opinions gun buyers had over pink painted, or otherwise feminine colored firearms. I’m well aware of the current popularity of such firearms. My mother’s Smith and Wesson M&P 15-22 is a pink camo. Of course a firearms paint job has no bearing on the performance; but such paint jobs seem to create a vast amount of opinions.

On more than one occasion, usually consisting of a wife in the company of her husband looking for a new or first time firearm for his wife to carry or keep in the home for self-defense; the conversation would lead to comments about the variety of color schemes and paint jobs. More importantly, the pink, purple and blue colored firearms would receive criticism and scoffs of disapproval. Me, being the open-minded (and sometimes sarcastic) conversationalist I am, would soon fall into the role of defending the pink and otherwise prettily pastel colored firearms. Keep in mind, I am not one to own firearms painted in bright and wild colors. I prefer my paint jobs to be tactical and flat, no reflection, with just a bit of personal flare to make them unique.

I would begin setting up a typical, hopefully never a reality, scenario of a hypothetical home intruder. Say for example your wife his home alone one evening and hears a banging at the door. Cautiously and responsibly she grabs her favored pink-painted firearm of choice and her phone, dialing 911 as the banging continues violently and scarily at the front door. She takes all the necessary steps. She fears for her life as the hypothetical intruder would not be deterred by the shouts of warning from a frightened woman on the other side.

Regretfully, the determined intruder gains entry to the house and sees the woman clutching her firearm expertly in her hand; but there’s a moment of pause. A slight hesitation on their part as they take note of the pink painted firearm pointed in their direction. Surely it was a joke, a pink firearm?

That brief moment of hesitation on the intruder’s part, while they consider if the pink firearm was any threat to them whatsoever would end up being their undoing; because that hesitation was all the time the woman needed to take aim and do as her training taught her.

Generally that was where I’d leave the story. More times than not, whomever I told the hypothetical tale to would agree with my logic. Of course there was always the rare few that would continue to argue for the simple sake of arguing; but I’m used to such opinions. I made my point, simply enough. That was all I could do given my position. Either way it made no difference to me. I imparted my thoughts on the tactical possibility that comes with owning such a firearm. In my own opinion, it could indeed be seen as an advantage. Could such hesitation actually occur in a real-life scenario? It’s completely possible, though I hope no one ever has to experience the hypothetical situation come to reality.
To wrap the story up in a neat and thoughtful bow, don’t knock a pink firearm. It may just be a fancy paint job or faddish choice and target marketing of women becoming more active in the firearms community. Whatever the case may be, pink and other similarly painted firearms are becoming just as common as typical tactical black. They have their place, tactically sound or not.

Previous article: FL Land Surveyor Shoots Suspected Armed Robber While On The Job Next article: Concealed Carry In California; A Look At The Process Of Obtaining A Permit