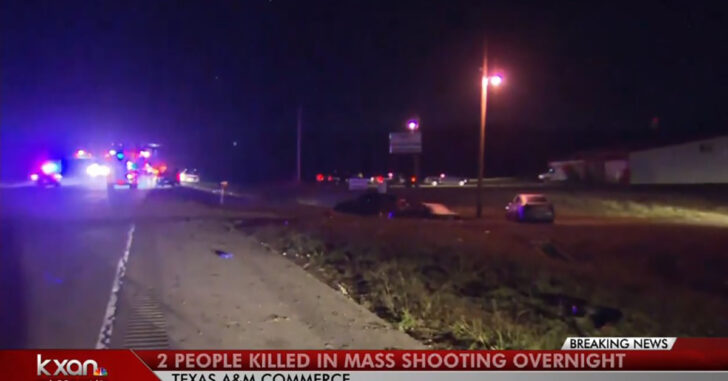 GREENVILLE, TEXAS — Police are searching for a suspect who they say is responsible for killing 2 people and injuring over a dozen others at a homecoming party last night.

The party was held off-campus and was not a sanctioned event.

The gunfire was said to have begun at 11:45 pm local time, and police say evidence suggests the suspect walked in through a back door before opening fire.

Police have no motive, and do not even have a description of the suspect they’re after.

“It appalls me that, as many folks that were there, (they) have not been able to give us a better description of this shooter,” the sheriff said. “Due to the many different descriptions being provided by those in attendance at that party, we unfortunately do not have any solid suspect information to provide at this time.”

There were roughly 750 people at the party, which was held at an events venue that was rented out.

According to at least one witness, they believe the first person shot was targeted, and the others were bystanders who were shot when the suspect opened fire on the crowd.

The Texas A&M-Commerce University Police Department sent out a tweet in the early morning hours about the shooting, letting students and faculty know that the shooting did not take place on campus.

There has been no active shooter situation in Commerce. There was an event outside Greenville, TX that may or not have involved students at this time. Further information will be posted when known.

[Chief Deputy Buddy] Oxford said deputies were nearby responding to reports of cars parked along Highway 380 when they heard gunshots coming from the venue and called for assistance. The shooter fled before deputies arrived at the scene.

We’ll follow up on this incident when more information becomes available.

Previous article: [VIDEO] Officer Shoots Woman Carrying Knife And Gun, Some Think The Force Was Excessive Next article: Police Find Woman Shot During Domestic Dispute, Later Arrest Her For Being The Attacker