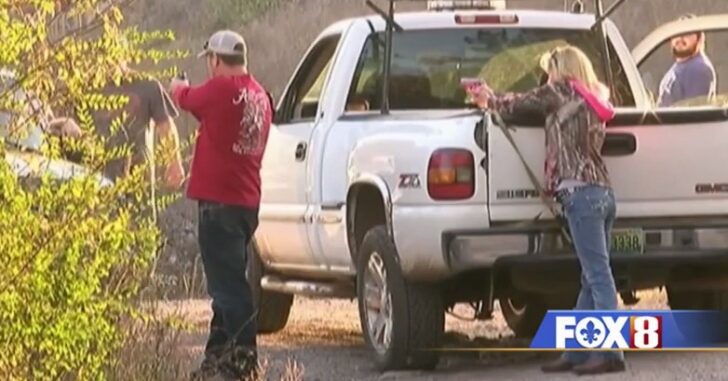 While being interviewed about a burglary, cameras quickly turned to the burglary suspects. Confused?

As a family member was being interviewed about a burglary that had occurred at their Alabama home two days prior, family members down the driveway noticed a vehicle going by the house. Thanks to video surveillance of the crime taking place two days before, family members immediately recognized the people in the vehicle as the burglars.

Even better, multiple family members were armed. They drew their firearms and successfully held the robbers at gunpoint until police arrived.

“When you stopped them, what did they say at that point?” asked the reporter. “Oh s**t.”

Deputies arrived shortly after and took the three suspected burglars away. Right before deputies arrived, they were at a different residence that was recently burglarized as well. So, they asked that victim to come down and possibly identify his belongings. He was able to, as they were inside the vehicle driven by the suspects.

Previous article: [BREAKING] PA Man Wanted By Police For Murder Tries To Carjack Person Who Is Concealed Carrier, Shots Fired Next article: PBS Has A Gun Control Poll And The Results Are Amazing