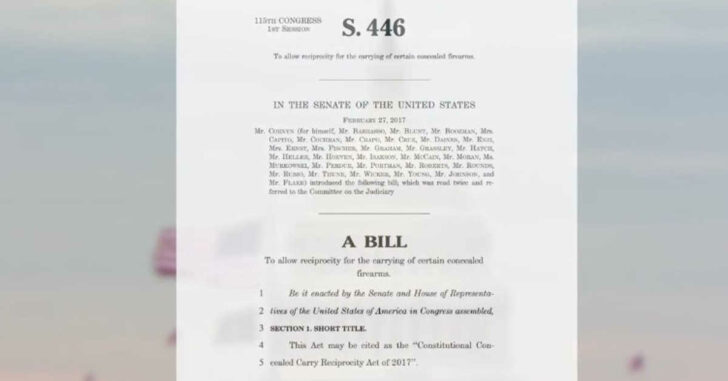 WASHINGTON, D.C. — Well, it’s finally happening. We’ve all heard the rumblings from Capitol Hill about a supposed National Reciprocity Act. If it ever made it to the floor, we’d have a chance of traveling all fifty states so long as our home state permits us to carry concealed and we follow the rules of the state we’re in.

There is a mixture of reactions to this bill but they have been overall pretty positive — especially for those who like to travel but hate having to leave the gun at home.

“Our right to protect ourselves is one of our most basic, if not the most basic right,” said Erich Pratt, executive director of Gun Owners of America. “It’s a good bill, that’s going to save a lot of lives because people should be able to protect themselves, not only in their home state but all across the country,” Pratt explained.

Opposition to this bill is strangely forced to take a side of the argument that they almost never do: argue state’s rights. Most anti-gun organizations plead with the federal government to enact punishing restrictions on what types of firearms people can own and where they can carry them and when. Now they’re forced to argue that state’s rights should always be considered before Federal law.

Feinblatt went on to argue that ‘one size fits all doesn’t make sense’… Without even regarding the fact that all citizens of the United States have a fundamental right called the Second Amendment.

“One size fits all doesn’t make sense, it’s not the tradition of this country and I don’t think anybody believes that the weakest link ought to be the law of the land,” he said.

It’s nearing the end of April and I still haven’t heard any word about this bill getting voted on by either the House or Senate. Without both passing it — and Trump signing it — it can’t be law.

All this political posturing is making my head ache. To me, it just sounds like more of the same from all sides — more promises, more virtue signaling, and no action.

If a politician wants to curry my favor or that of his constituents, approve the measure or debate it on its actual points. To be perfectly honest, as much as I hate the ‘state’s rights’ argument, there is a grain of salt to it. I support a state’s right to set its own precedents for its own people and way of life. I fully support it, in fact. While I absolutely hate the convoluted mess of state-to-state concealed carry reciprocity, I think the only argument I would honestly accept is that proposing a national measure would immediately force compliance from states.

Should states accept each other’s concealed carry licenses? Absolutely. Now, what’s the best way to go about it?

If this bill became law, I wouldn’t complain at all. However, until the D.C. politicians actually put their names on the ‘yea’ or ‘nay’ lines, I’m withholding further conjecture.