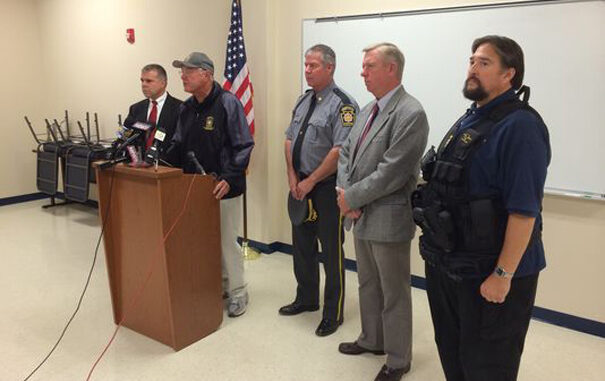 Last night during a shift change at PA State Police barracks in Blooming Grove, two officers were ambushed by a shooter or shooters. One officer was killed and the other was taken to the hospital with injuries.

The person or persons responsible are being sought after a massive manhunt began shortly after the shootings. Officers from neighboring states have also come to assist in the manhunt.

Authorities did not have a description of the shooter or shooters but said they were following several leads. Noonan added that the attack seemed to be directed solely at state police.

Noonan also said police did not believe the general public was at risk, but they are asking everyone to be on the lookout for anything suspicious.

Police are asking anyone with information to call 911 or the Honesdale state police barracks at 570-253-7126, The Times-Tribune reported.

If you are in the area, keep your eyes open for anything suspicious. Even if you notice something small that’s out of place, don’t hesitate calling the number above. The smallest lead could end up bringing the person or persons to justice.

Previous article: Robber Draws Fake Gun, Store Owner Draws Real Gun Next article: [VIDEO] The TODAY Show Offers The Worst Advice Ever For Handling A Home Invasion, To The Point Where You Won't Believe It