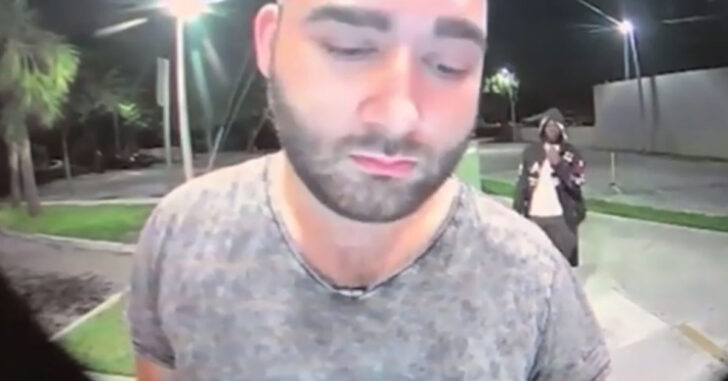 MIAMI BEACH, FLORIDA — Situational awareness is something that we all, as concealed carriers, strive for on a daily basis. It’s not always possible to know what’s going on around us at all times, but it’s even more important when we are doing things such as visiting an ATM. A terrible tragedy comes to us from North Miami Beach, and shows what can happen when we don’t see someone sneaking up behind us.

The footage shows Marcine Bernard Hill, 17, calmly approaching an ATM in North Miami Beach in November. Clad in a black Ecko jacket emblazoned with the words “Kill Batman,” Hill saunters up behind victim Dillon Bud Calvin Steve, who turns around to notice Hill at the last moment. Steve, 26, quickly glances at his mother’s van in the parking lot before dropping the cash and lunging at Hill. He’s then seen grasping his chest while staggering toward the van before collapsing. He later died at a hospital.

Hill, who remains in custody, is not eligible for the death penalty since he was a minor at the time of the fatal shooting, but could face up to life in prison if convicted. Initial charges of first-degree murder were filed against him Nov. 21, online records show.

As far as I’m concerned, a 17-year-old should hold enough brain power to realize that murder is wrong, and is something that he shouldn’t do. But, it seems that the thug life has taken Hill over, and now we can at least hope that he stays behind bars until his life ends. There is absolutely no reason for him to be released at any point. Ever. I don’t care if he’s a model inmate that’s ‘found God and turned his life around’. You do the crime, you do the time. This ‘non-adult’ knows right from wrong. Period. I extend my condolences to the family of the victim, and hope that they are able to find peace one day.
Categories: General, Video