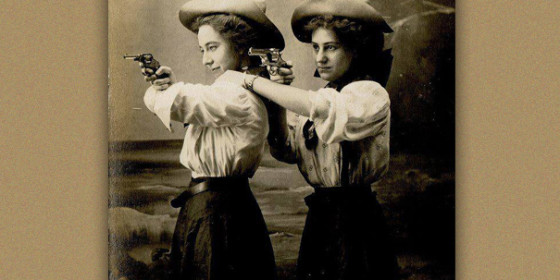 According to the National Shooting Sports Foundation, between 2011 and 2012, there was a 79% increase in the number of female firearms customers as reported by retailers.  This notable increase in armed women also brought along an increase in classes, specialized apparel, custom firearms, shooting-group memberships and conferences for specifically for women.

In 2012, Carrie Lightfoot founded The Well Armed Woman, whose company goal is to introduce women to guns in a safe, supportive environment.

“We focus on educating, equipping, and empowering women shooters.”

One of the main reasons she thought this group was needed was to represent the “everyday woman,” which seemed to be missing from the industry.  I’m sure women who carry, and even those who do not, can identify with Lightfoot’s point…

“There were these two common extremes. One was a like military-type, real rugged woman with a gun … and the other was the more sexual, sexy woman with a gun. A woman in a bikini holding an AR-15 (semi-automatic rifle).”

There have always been women who do carry guns, but it hasn’t been until recently that they have formed their own type of community within the industry.

The role of women and their independence has changed a great deal over the years.  Lightfoot explains, “Owning a gun as a self-protection tool mirrors this shift of women from being the protected to being the protector.  Women are taking on that role – they have to,” she said, “And they’re taking it on pretty fiercely.”

Previous article: You Are Invited To Dinner At A New Friend's Home, Do You Ask Permission To Carry Inside Their Home? Next article: You Won't Believe Why This 7-Eleven Clerk Shot A Thief In The Head