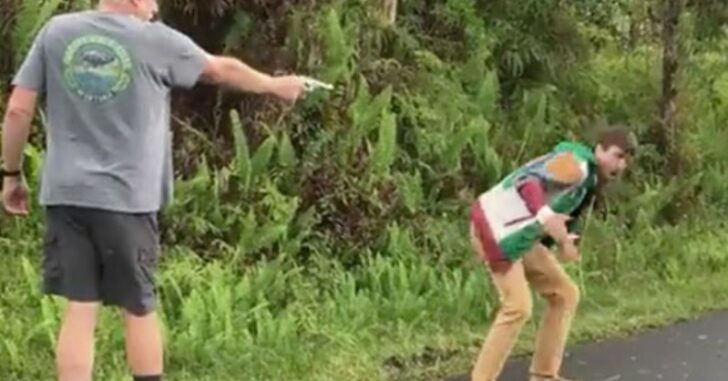 As the volcano wreaks havoc on a Hawaiian island, people are nervous about property and life, and it seems that some tensions are running higher than others.

In a video uploaded a few days ago, a gun owner is seen doing something incredibly irresponsible when he thought that they were possibly there to loot or partake in some other criminal activities.

But they weren’t. They were neighbors.

As a result, 61-year-old John Hubbard was arrested and charged with reckless assault.

“They feel like, they see strange people in their subdivision, whether it’s people just wanted to go see lava or criminals, and they try to protect stuff.

“I could see it coming. I know it’s something that happens in a lot of disasters, whether it’s in the shelters or in the communities. A lot of stress, a lot of things are going on there. It’s a hard time for those folks still in there.”

That almost sounds like making an excuse for Hubbard, but maybe I’m misinterpreting the statement. While we don’t know what led to the shots being fired and what transpired before, it doesn’t seem like anyone’s life was in danger (except for the volcano, of course) and that this action of firing the gun multiple times over someone’s head was… excessive.

This neighbor even has a compilation of his behavior posted to YouTube in 2009.

Ah well. This irresponsible gun owner now faces his new charge of reckless assault and will need to deal with it. Until then, here’s a screen shot of the news anchors after showing the video of Hubbard firing the gun. Previous article: Parkland School Shooter Video: "When You See Me On The News, You'll Know Who I Am" Next article: WATCH: Gun Goes Off While Holstered In Appendix Carry Position. Negligence or Accident?