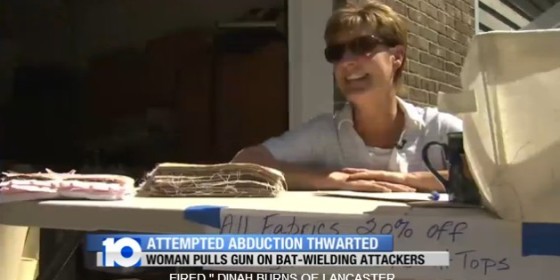 A woman in Ohio was on a walk with her dog, one that she’s taken hundreds of times before. This time however, she was met by two men who came out of the bushes with baseball bats and said “You’re coming with us”. The men were not deterred by her dog.

They were deterred however, by the firearm that the woman drew from her purse and quickly pointed toward them.

I have this and I’m not afraid to use it.

As you probably have already guessed, this sent the two men fleeing at a quick pace.

The woman, Dinah Burns, has her Ohio concealed carry permit and says that she just recently started carrying it with her while out on her walks.

Very thankful that it turned out the way it did, and hope it doesn’t happen again, but I will be prepared.

This is a reminder to us all that we should be carrying at all times. Even a routine route for years can throw an unexpected turn in a second. It’s up to us to be prepared for when, if ever, this happens.

Previous article: CCW IN ACTION: Dairy Queen Employee Shoots And Kills Robbery Suspect In Albuquerque Next article: If You Ever Go To The Post Office, You May Be Breaking The Law