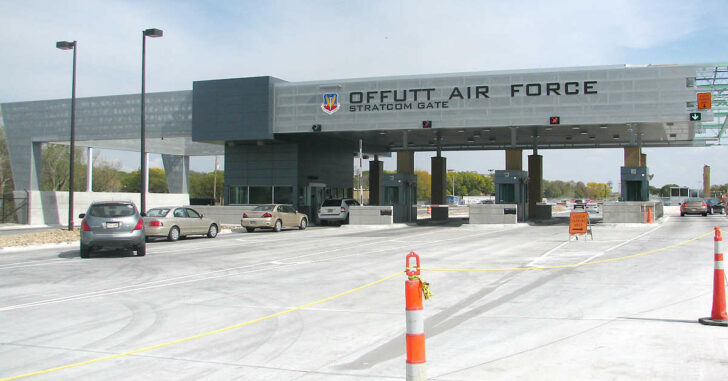 OFFUTT AIR FORCE BASE, NEBRASKA — It used to be that in order to carry a firearm onto a military base, you would have to be directly given permission from the Base Commander. This permission was usually only extended to active duty military police and security forces. But, according to a recent provision that went into effect on January 11, now both active duty and retired military police officers may carry their handguns on base.

As James Baranowski, manager of external and international affairs for the National Rifle Association, recently explained for the Omaha World-Herald, this is just a baby step in the direction of the Law Enforcement Officers’ Safety Act.

LEOSA, as it is commonly referred to, allows both active and retired law enforcement officers to obtain a permit that allows them to carry concealed in all fifty states. The act was passed in 2004 in response to the attacks of September 11, 2001. Baranowski said that it was largely thought that law officers would act as an additional buffer to stop terrorists in the event that other law enforcement couldn’t reach the scene in time.

Unfortunately, the original provisions of the act did not explicitly include those serving in the military. Since 2014, members of the military police were considered covered under LEOSA. However, in order to qualify, the officer would have needed roughly 10 years of experience in the profession. This precluded many first enlistment military members.

The new rules on Offutt Air Force Base only apply to military police — past and present. It doesn’t extend to airmen outside of those military occupations.

Civilians are positively excluded from carrying firearms onto base unless they are transporting them to a range or personal living quarters. And, in those cases, the firearm has to be unloaded and in a locked container.

Exceptions are only allowed by order of the Base Commander, generally. And those exceptions do not come often.

Military bases and Department of Defense facilities are covered under Federal law. As such, they are generally considered “gun free zones” for civilians and those military personnel not expressly allowed to carry firearms.

Unfortunately, this has lead to military members being targeted. In 2013, two separate attacks on military bases lead to the death of quite a few soldiers. Both were carried out by a person who was not authorized to use a firearm or carry one. However, law abiding soldiers and military personnel are precluded from defending their own lives due to these restrictions.

“You know what a gun-free zone is to a sicko? That’s bait. ‘Gun-free zone?’ And then they walk in with whatever the hell they’re carrying. I will get rid of gun-free zones on schools — you have to — and on military bases. It gets signed, okay? My first day.”

However, he has yet to issue an executive order undoing that. This could be because in order to truly dismantle the framework of federal “gun free zones”, it will require Congress and quite a few State governments. While President Trump has been very proactive in issuing executive orders to fulfill campaign promises, there is likely a bit more nuance to current laws forbidding concealed carry on military bases.

The good news is that bases like Offutt and others are gradually examining how they can get the greatest Force Protection bang for their buck. Hopefully, one day, it will result in full fledged concealed carry on base.

Previous article: When Seconds Matter, Five Minutes Is A Long Time To Wait For Help -- South Dakota Chairman Pulls The Alarm To Show Other Members Why Concealed Carry At The Capitol Is Important Next article: Why The Handgun?