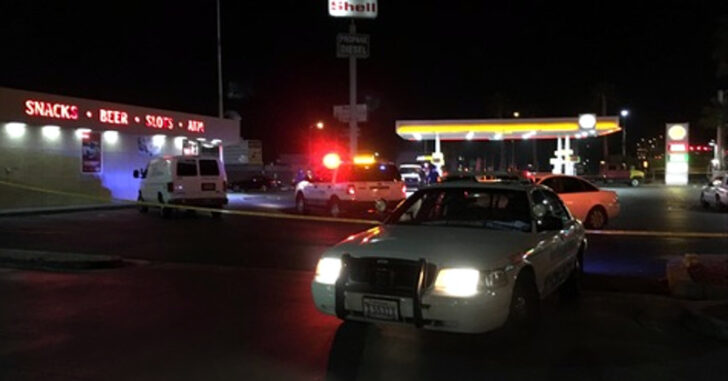 LAS VEGAS, NEVADA — As reported by 8 News Now in Las Vegas, an armed, law-abiding citizen was critically shot trying to intervene in an armed robbery in progress at a local gas station convenience store.  According to the news report, the man exchanged gunfire with the robber before the robber fled the scene.  It’s unknown whether the robber was hit or not but Las Vegas police are still on the look-out for the suspect.

There’s a critical disconnect, though, on behalf of authorities and gun carriers as what the proper course of action would have been.  On one hand, the armed robber was not directly threatening the victim.  On the other hand, the armed robber was in the process of committing a violent felony.  Depending on state law’s definition of authorization of deadly force, that man would have been justified in applying it to that armed robber.

While we can sit here idly and discuss the ramifications of what one man decided to do to stand up to violent crime, ultimately it comes down to this: if you draw down on an armed criminal, you’re risking your life.  All life is a risk.  There’s no guarantees.  We all die eventually.  If you see a violent, armed criminal robbing someone else, you’re absolutely free to walk on by.  That said, if you decide to turn and face that thug, you get to pay the consequences.

It’s also one of the reasons why police usually urge civilians to stay put and comply with armed criminals.

“The best you can do is call the police, notify the authorities of what’s going on so we can come and deal with situations like this,” said North Las Vegas Police Officer Steven Wiese to 8 News Now.

A another convenience store near where the shooting happened, worker Carina Negrete says she’s been trained to never confront a criminal whether or not they are armed.

“Don’t argue, don’t try to handle the situation. Just let it happen because your safety is more important than whatever they are going to take,” she said.

“It’s tough and it’s sad, you don’t want anybody to get hurt but sometimes people sacrifice themselves for the greater of others,” said Tyler Harris, a customer.

We here at Concealed Nation assuredly wish the victim a speedy recovery.  For the rest of us, let it be a reminder that training, preparedness, and safety should never take a backseat to pride.