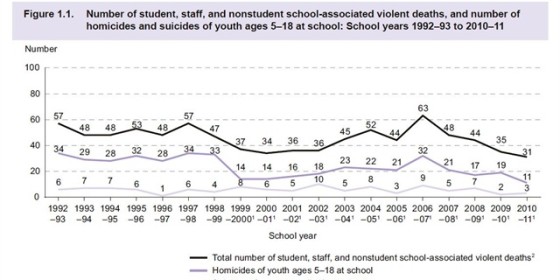 Recently, President Obama made a statement regarding the recent school shooting in Oregon, saying that “This [school shootings] is becoming the norm”. I’ve been skeptical about the reports that tell us of the increasing number of school shootings, and then I quickly remind myself of a report that was put out just this month by the Bureau of Justice that in fact shows us this isn’t the case at all.

The report examines all homicides that have taken place at schools across the country. Their definition of a school homicide also includes a broader reach than just homicides that happened on campus. The numbers also include: “While the victim was on the way to or from regular sessions at school or while the victim was attending or traveling to or from an official school-sponsored event.”

If you look at the last few years in the chart, we actually see a 50% decrease in violent deaths. What the cause was for the decline is anyone’s guess, but it certainly isn’t rising. We don’t have a clear picture though, since the shooting at Sandy Hook was a horrible act of violence that took numerous lives. The chart above only goes to the end of the 2011 school year, thus not including data from 2012 (when the Sandy Hook shooting took place).

If you’ve been paying attention to the Everytown campaign headed by Shannon Watts (Moms Demand Action) and former NYC Mayor Bloomberg, you’d be inclined to think that the numbers from the chart above are rather low. Well, you’d be right. They’re low because while Everytown was gathering their data of 74 school shootings since Sandy Hook, they added many instances that shouldn’t be classified (at least I don’t think they should be). One example of their 74 is a killing that happened in an elementary school parking lot, however it took place at night and the victim was 19 years old.

Moreover, their map includes at least four “school shootings” in which no one was injured at all.

For a closer look at the truth, click here.

Any way you slice it, I think we can all agree that there hasn’t been a massive increase in school shootings. The media is just hyper-focused on them over the past few years. It’s an important topic and everyone wants their children to be safe. We want to achieve that same goal. What we need to do is take a step back and figure out what the real issues are, and then we address them. Spoiler Alert: We have a serious mental health issue in this country.

Remember, this guy killed 50% of his victims with a knife. No matter what, he was determined to cause destruction. We need to dig deeper, folks. It’s not the gun’s fault. It’s not the knife’s fault.

If school shootings are really on the incline, maybe we should stop allowing our children to be sitting ducks. I’ll make a bet with the first person to take it: Put a legally armed person in each school (whether it’s a police officer, retired vet or a faculty member with a carry permit) and I guarantee the shootings will drop dramatically. The bad guy doesn’t want a fight.