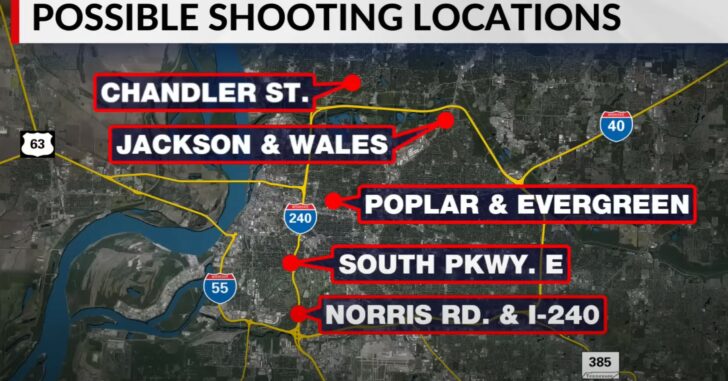 MEMPHIS, TENNESSEE — A 19-year-old mental case is in custody after police say he shot and killed multiple people in different areas of Memphis on Thursday, and live-streamed at least some of the rampage that lasted over 20 hours.

Officials in Memphis pleaded with residents to stay inside until the person responsible was captured.

If you do not need to be out, please stay home!

The suspect later walked into an Auto Zone and shot a customer, then took a vehicle to a gas station and shot someone as they were filling up. He then went down the highway and found a random woman, who he also shot.

He then needed a new vehicle and carjacked someone, shooting them in the process.

The suspect was taken into custody after crashing another stolen vehicle, ending the rampage and the search for this mad man.

A total of 4 people were killed and at least 3 injured.

During the shootings, it is believed the suspect live-streamed on Facebook, including at least one of the actual shootings as it took place.

19-year-old Ezekiel Kelly is finally in custody after going on a shooting spree while on Facebook Live in Memphis
pic.twitter.com/KlpcN6oNlq

The suspect was smiling in his mug shot while being booked for the crimes.

Concealed Nation promotes the importance of responsible concealed carry, and dedicates their time to helping people through the journey of firearm ownership and carrying a firearm for self-defense. Had this suspect been met with an armed ‘victim’, he likely could have been taken out early on in this crime spree.

We have seen the video of one of the live-stream, and it’s crazy to see how quickly things like this happen to innocent people. That’s why, more than anything, we promote the carrying of firearms by lawful individuals, and that they’re trained to defend themselves in terrible situations.