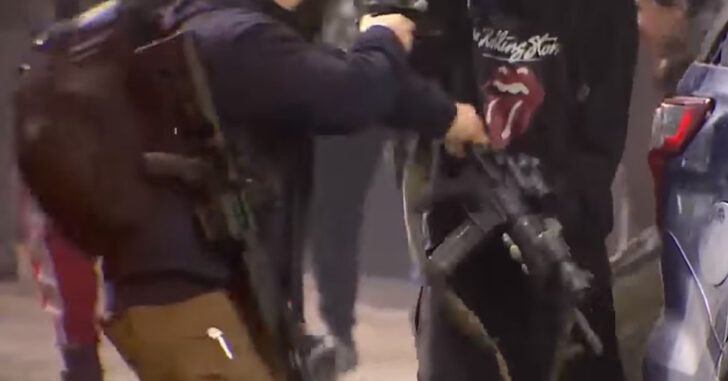 It all happened on live TV in Seattle, and it’s a pretty amazing thing caught on camera.

Anyway, this kid takes the rifle and starts acting like a real badass with it in his hands.

As the cameras roll on live TV, a guy comes out of nowhere, and he’s got a rifle over his shoulder and a Glock in his right hand. He happens to be a security guard that’s out with one of the news channels, and he’s there to handle business.

He gets his left hand on the rifle and successfully and quickly takes it away from the wannabe thug, all while maintaining his Glock on the target.

Meanwhile, the kid has absolutely no idea what’s going on.

His hands go up, and he’s probably thinking he’s about to get arrested. Not the case (at least not right now), and instead he’s simply been disarmed.

But he still has no idea what to do. He stands there, maybe exchanging words with the man who just stole his stolen gun, and freezes.

Next up is another man who comes into frame to pull the kid away, kinda like “Hey bro, you don’t want any of this. It’s probably a good idea to get away from the guy with 3 guns.”

Off he goes, hands still up, still in shock, realizing he’s still a baby.

Our good guy scans, as he’s been doing the entire time, and then quickly and efficiently unloads the reclaimed rifle and gives it to back to police.