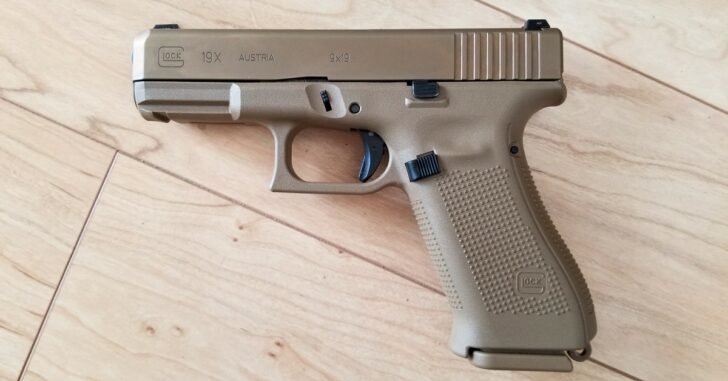 It’s no secret that I’m a big fan of GLOCK pistols. I’m a fanboy, that’s for sure. However, if GLOCK ever came out with a pistol that I didn’t like, I’d say so. Luckily, it hasn’t happened yet.

This year, we were introduced to the brand new model GLOCK 19X. It was a mystery for a few months, but was finally unveiled in January.

The GLOCK MHS pistol, pictured below, was seen in June of last year, and was the company’s submission for the run to be the new Modular Handgun System (MHS) choice for the US Army. GLOCK didn’t win, and instead the crown went to SIG Sauer and their P320. It wasn’t known at the time whether GLOCK would make a commercial version of the above pistol, but now we know that they made the decision to do so. Enter: GLOCK 19X.

So, what’s with the ‘X’ in the model name? It’s the first-ever GLOCK crossover pistol, meaning that it’s a blend of two of their most popular firearms; the GLOCK 17 and 19.

Let’s see what GLOCK has to say about their newest edition to their already stellar line-up:

GLOCK’s first ever “Crossover” pistol, the GLOCK 19X, combines the best features of two of its most popular and most trusted field-tested platforms. The full-size GLOCK 17 frame and the compact GLOCK 19 slide have joined forces to produce the ideal pistol for all conditions and all situations.

The 19X comes in the coyote color with the first-ever factory colored slide, finished with a nPVD slide coating to prevent corrosion. Additional features include the GLOCK Marksman Barrel (GMB), no finger grooves, ambidextrous slide stop levers and lanyard loop. Included with the pistol is a standard 17-round magazine, two 17+2-round magazines and coyote-colored pistol case. First, let’s get to the generosity of GLOCK. With this particular model, they provide a 17 round magazine, and two 19 round magazines in the form of +2 extensions. With many other manufacturers, they’re only giving you two magazines. It’s always nice when you open a box and see three. She’s a beauty, I know. Some say that GLOCK makes a horrendous-looking pistol, but I disagree. While I’ll admit it’s not the most beautiful thing on the planet, their design is tested and true, and this new color is just fantastic with the black highlights of the trigger, slide stop and magazine release. Added to the 19X is a lanyard loop, which while scouring the internet, most people aren’t a fan of. If you fall in this category, it’s easily removed. Just like the aftermarket plugs that people buy to fill in that hole behind the magazine, GLOCK simply made one into a lanyard loop. Again, it’s easy to remove if you prefer. With the Gen5 pistols, we have some differences with the design that stand out. First, they got rid of the finger grooves on the grip, which was something that many people weren’t a fan of. It makes it more comfortable to hold, IMO, and I welcomed the change from the beginning. Just like the regular 19 and 17 models, there’s a rail for any accessories that you’re wanting to put on there. Want a laser? You got it. A light? Space is available. Night sights are standard on this pistol, and I honestly don’t like carrying a firearm without them anymore. They light up nicely in the dark and IMO, should be on every firearm that is carried. While many cases of self-defense are simply point and shoot, there are times when being able to actually see the sights can come in handy. As stated previously, you’ll receive a 17-round and (2) 19-round magazines. Above, you can see the two side by side. The 19-rounder adds a +2 base plate, letting you squeeze a few extra rounds in.

Shooting the pistol was pretty much like shooting a 19 or a 17. With the size and weight, it’s an easy shoot for beginners and experts alike. It is a real pleasure to shoot, for sure. Recoil is absolutely manageable and follow-up shots are easy to get right on target. The full-size grip allows for a stronghold on the firearm, which is something that is always welcomed.

For concealed carry, the 19-sized slide makes for easier concealment than the 17, but you’re still dealing with a lengthy grip. Some can conceal a 17 with no problem, while others tend to stay away from the full-size. This firearm makes for a nice compromise between the two and with some adjustments in carry position and/or wardrobe, many will be able to conceal this without any issues.

As far as holsters go, the reviews are mixed. Since this firearm has an ambidextrous slide stop, you may –possibly– run into a little snag with holsters made for the straight up 19 that are pre-Gen5. If, for example, you’ve got a hard shell on the outside and a piece of leather or other similar backing material on the inside, you should be alright. If, however, you have a hard molded shell on both sides, there may not be enough space for the ambi slide stop. You also don’t want to ruin any paint job on the slide stop (or scratch up your holster), so be sure to take care when fitting this firearm. There is also a slight difference between different generation GLOCKS, so be sure to ask the holster manufacturer if it’s a good fit before dropping a lot of cash. Or, of course, grab a holster that offers returns if you aren’t happy with it. When in doubt, check to see if the holster is made for your Gen5 GLOCK.

Conclusion? I’m a fan of this crossover that brings together two excellent offerings from the GLOCK lineup. Sure, it’s not going to be for everyone, but it does allow a little more concealment coupled with higher capacity.

Previous article: FL Governor Rick Scott Calls For New Gun Laws In Wake Of School Shooting Next article: RESULTS: Where Do You Keep Your Gun At Night