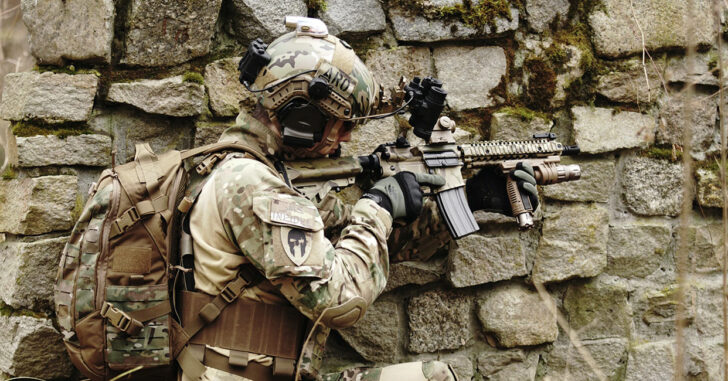 This article was originally published in 2015.

Nobody should ever stand out in the open and trade bullets with a bad guy.  The second rounds start coming in, it’s well advised to take up some stable amount of cover.  But what constitutes cover versus concealment and why is one more advantageous than the other?  In this article, we’ll break down what each of them mean and how they play an important part in surviving a self-defense scenario.

Cover Or Concealment – Which Is Better For Concealed Carriers?

Good cover will ideally reduce the available space for an attacker to make contact with weapons (firearms or otherwise).  Materials such as steel, concrete, water, packed earth, and thick wood all make great resources for cover.

Good concealment will ideally allow you to observe your enemy without him (or her, or them) being able to readily observe you back.  Elements like foliage, netting, shadows, fabric, and non-reflective surfaces can all make for a great basis for concealment.

Your first priority in a live fire scenario is to reach proper cover.  Good cover, unfortunately, can greatly limit your visibility – but it also limits your enemy’s visibility of your position.

It is possible to combine both cover and concealment using the natural and artificial landscape elements about you.

Mute anything that is reflective on your person.  Things like:

…can all serve to give away your position and destroy your chances of concealment.  If you have any of those items on you, ensure they are secured prior to movement in an active shooting environment.

Avoid placing yourself in high contrast with your surroundings.  For instance, if you’re wearing dark clothes and your back is against a lightly colored wall – you are extremely visible.  Conversely, wearing light colored clothes against a brick background can also work against you.  Whenever possible, observe your surroundings and attempt to choose a route that provides the most shade.  When your enemy may have a direct line of sight to your position, reduce superfluous motion to a minimum.  That means no waving arms, issuing out calls for others, or fast, erratic movements.  If you’re going to bolt – you’re deciding to abandon concealment altogether.  That’s a choice.

Concealment In An Urban Environment

In an urban environment, your main priority is going to be using buildings to limit your enemy’s field of fire.  When possible, try to avoid long, narrow corridors or exposed open ground.  Skirt along the edges of buildings, using cars and hedgerows, and any other features of the landscape to make your way out of the active shooting environment.

Fighting in an urban environment is extremely unpredictable.  While buildings can provide great cover and concealment for observing an enemy’s position, they also feature plenty of pitfalls.

A great resource to learn more about urban combat is the Marine Corps publication MCWP 3-35.3 – Military Operations on Urbanized Terrain (MOUT).  While the majority of this document refers specifically to military operations, some of the advice it has when discussing movement down a street, and defensive operations (Chapter 3) are especially on point.  The biggest downside to this publication as it relates to the concealed carrier would be the reliance on having numbers, a command structure, and support – three things not likely to be arriving in time to help.

In a future article, we’ll go more into depth about cover and concealment in other types of environments and how you can use the natural terrain presented to facilitate either your escape from attackers or as an ad hoc defensive position.  Remember: the job of the concealed carrier is to preserve his own life, that of his family, and of his property.  And in so far as property is concerned, it is far better to retreat against superior numbers than it is to foolishly enter into a hostile shooting environment armed with little more than a pistol.

Would you like us to cover more in-depth topics concerning survival in an active shooting environment?  Let’s discuss it in the comments section below.

Previous article: The Hellcat™ from Springfield Armory is a Must-Have Concealed Carry Firearm Next article: Man Asleep On Couch Wakes To Two Intruders Kicking In His Door, Then Fires Biden Shot