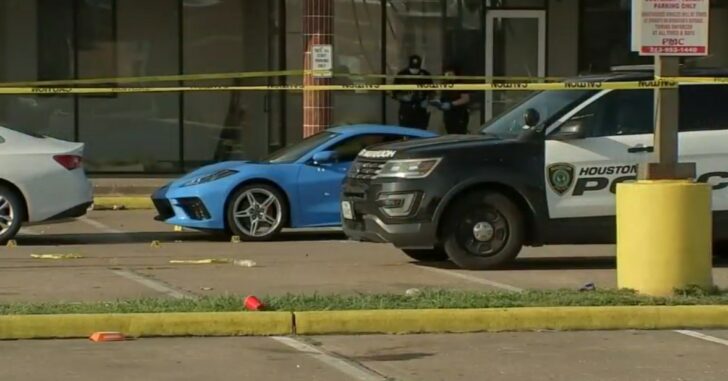 HOUSTON, TEXAS — A man is dead after police say he tried to rob a man who was at a nearby café. Multiple witnesses told police that the suspect approached the man and began his robbery attempt, at one point telling him to “Give me your car.”

The intended victim was armed, but not immediately. It appears that he needed to retrieve his firearm from the vehicle, at which point he fired shots at the suspect.

“He felt his life was in danger and was able to return fire and shoot the decedent two or three times,” HPD Det. Jason Campbell said.

After being shot three times, the suspect ran onto the top of a car and then tumbled to the parking lot where he died.

Police were back on the scene later in the day, possibly in an attempt to gain access to any surveillance video from nearby stores.

“That shooter is cooperating with our investigation and he has since been transported down to (HPD headquarters) where he is being interviewed by detectives. That suspect is dead on scene via gunshot wounds,” Campbell said.

Previous article: 9 Shot, 1 Killed In Hookah Lounge Shooting In San Bernardino County, CA Next article: Man Shot At 6 Times Because Criminals Wanted His Watch. Luckily They Were A Terrible Shot.