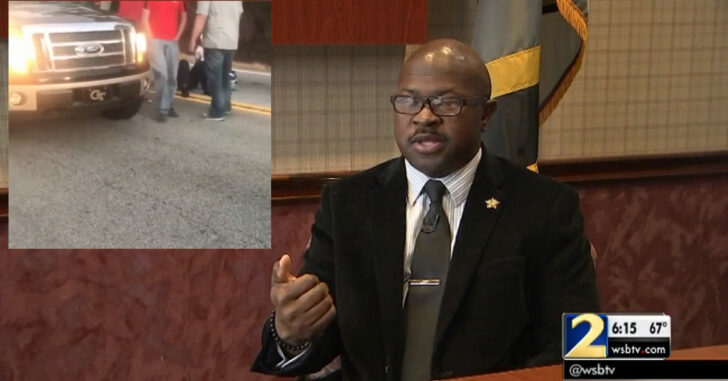 WALTON COUNTY, GEORGIA — Rockdale County Sheriff Eric Levett was trying to go home after a long day when he saw a road rage incident escalate to violence. He witnessed an incident on the road involving a lone driver and another vehicle with four dudes inside. The men got out and began approaching the driver, yelling. One of them had a knife. The driver, reportedly in fear of his life, shot one of them.

Thankfully, there was a sheriff there to ensure it went no further.

According to statements provided by the sheriff to WSB-TV, it appears the shooting was justified.

“I can tell you the one gentleman was in the car by himself, he was solo, alone. And you have four guys approaching you yelling, it appeared to me he feared for his life,” Levett said.

The driver shot one of the four men, resulting in a non-life-threatening gunshot wound. Because the sheriff was only a few cars behind, he was able to pull ahead and de-escalate the incident from going any further. According to the man who defended himself, he just wanted to go home and see his family again.

“Will I be able to go home to my family? That was the only thing going through my head. I was trying to get home,” the gun owner said.

The offending party obviously saw the driver’s actions as being in the wrong. Incensed with rage, they were about to mob a man in his vehicle and potentially cause him grave harm. Should this incident have been de-escalated well before then? Absolutely.

We’re asking our readers: if someone gets out of his vehicle and approaches your vehicle with a knife in hand, after a bad interaction on the road, how would you interpret that?

At this particular moment, the man who defended himself has not been charged with any criminal wrongdoing. That’s not to say he may not face civil charges relating to the incidents that lead up to that event.

This is the problem with road rage. Both parties are in the wrong to some degree. When it escalates beyond rude hand gestures and swear words, though, now you’re dealing with real human lives at stake. There’s no play room on that.

There’s a line. If you can avoid it, avoid it. If you can’t, know when it’s time to defend yourself. The road is all of ours to share and there’s nothing so bad in a traffic jam that we can’t just let it go and move on. Let’s respect each other’s lives and take the initiative to not engage in road rage violence.

Previous article: Essential Self-Defense Law Part II: Appropriate Force Next article: Even After Getting A Restraining Order, Neighbor Gets Shot Trying To Run Down Homeowner With Car