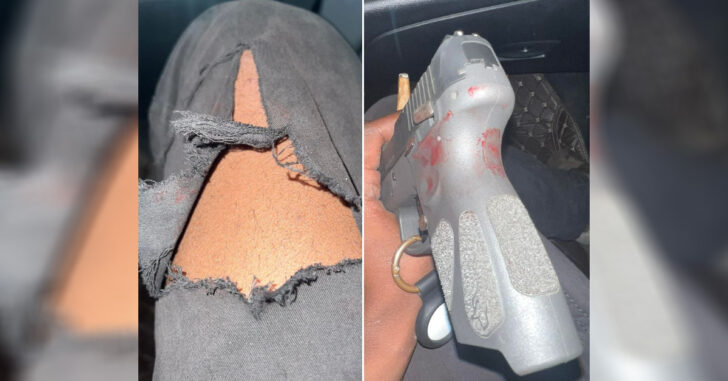 Since it’s the internet, I’m not sure if this guy is trolling or not. According to his Facebook profile, he works as a security guard for a company in the New Orleans area since 2020. The post below, in relation to the incident, says that he was working at a register. I’ll assume he possibly has two jobs, if any of this is actually true.

In any event, here’s the short version of events. While at work, he was carrying his firearm in his pocket and it was riding solo. His keys were in his other pocket and at some point, he moved his keys to the pocket containing his firearm. As he was sitting (or standing) and reportedly not doing anything, his gun goes off.

First, I see no visible injury to his leg or blood on his skin or pants.

Second, he seems to be smoking weed in one of the images.

Third, he has some sort of tracking dongle attached to the trigger guard.

Fourth, his big takeaway from the incident was to not carry at work.

All signs point to troll, but then again, the world we live in now is filled with people who continue to surprise us on a daily basis.

If you’re going to be pocket carrying, make sure that you: Have a proper holster to protect the trigger, and keep nothing else in the pocket that your firearm is in.

Previous article: Putin "Shoot Yourself" Sculpture Put Up In Kyiv, Removed After Just 8 Hours Next article: Road Rage Leads To Driver Having A Gun Pointed At His Face