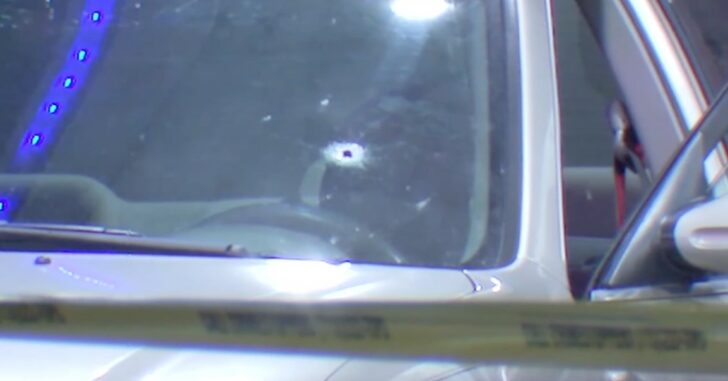 HOUSTON, TEXAS — A 1-year-old was shot while in the back seat of his mother’s car in a bizarre and unlikely scenario.

A man was running from police when he crashed his vehicle near a gas station. Searching for freedom, the suspect got into someone’s vehicle as they were pumping gas. As mom was outside the car at the pump, her 1-year-old in the back seat, the suspect found himself in a gun fight with police.

Police pulled up and told the suspect to drop his gun, fearing that he would either shoot or try to get away.

According to police, the man didn’t drop the gun, and that’s when the officer fired, hitting not only the suspect, but also the 1-year-old child in the backseat.

“The most important thing right here, for our entire city, pray for this 1-year-old and that mother,” HPD Executive Assistant Chief Troy Finner said. “Can you imagine? She’s pumping gas, probably coming from work or whatever, and has to go through this. And now she’s in the hospital and we’re all praying for that baby.”

The suspect was pronounced dead at the scene.

The child was taken to the hospital and is said to be in stable condition.

Surveillance video of the incident can be viewed below.

One thing that we discuss often; lock your vehicle while you’re pumping gas. Not only can something strange like this happen, but it’s a common con for the bad guy to creep into the passenger side door and take valuables while you pump gas and aren’t paying attention. Locked doors, in more cases than not, will simply have them move onto the next vehicle.

That same idea would have likely sent this suspect into a different direction if he found trouble trying to access the vehicle. He knew that his time was limited, and would have probably kept going in his efforts to find an easier opportunity.