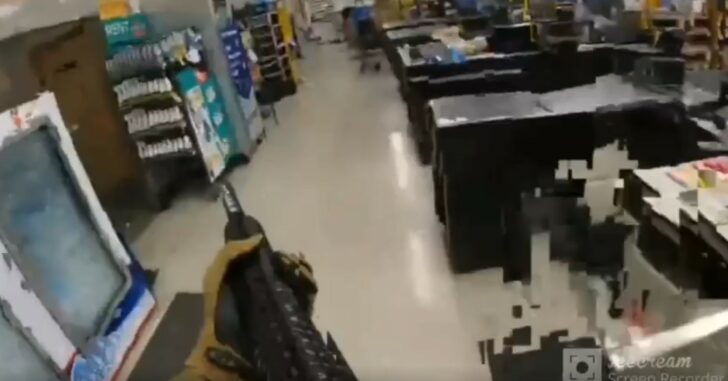 Yesterday’s mass shooting in Buffalo, NY was devastating for the community and for the Country. When an element such as live streaming is introduced, it makes it that much more real for people who see the footage and truly understand the destruction that took place, and the short window in which numerous lives were taken.

I am one such person who saw the video of the live-stream, and it will absolutely be one of those videos that haunts me forever. It simply cannot be unseen.

I have debated for hours whether or not to share the video, and here are my reasons for and against:

– When we understand what actually can take place during a mass shooting, it stays with us more than simply reading words on a screen or viewing some screenshots. If you view a video such as this one, and you care about your safety, you will absolutely take your safety with more seriousness than you do now. Guaranteed.

– People tend to make themselves better prepared for events such as this, after viewing such graphic content and realizing that “Hey, this is something that actually happened and it’s horrible. What would I do in that situation? Am I currently prepared for this?”

– Sharing of such graphic content is a hard thing to do, and many people will be affected in negative ways after viewing. It is absolutely not for the faint of heart.

– Giving the suspect time of day by showing his “work”.

This article will be filled with screenshots from the video, with detailed discussion throughout. At the end of this article, a link will be provided to the original video for those who make the decision to watch. I warn you again, and will later as well; this is a difficult video to watch.

People are out there, right now, training to kill you. Are you training to defend yourself?

Any victims who could be identified in the screenshots below have been blurred.

At the start of the 1 minute and 2 second video, the suspect is seen driving through the parking lot. The first video released showed him driving even more, but this graphic clip has been shortened to remove some of that driving.

The suspect pulls up to the front of the grocery store and immediately exits the vehicle. You can tell that he’s practiced this before, and it’s also explained in his lengthy manifesto.

When he exits, there are multiple shoppers in front of him. He immediately opens fire, first striking a woman directly in the head with his first shot. Her time to react was basically zero and outside of him missing with that shot, I doubt she would have had any options available to her.

This poor woman has no time to react and by the time she looks in the suspect’s direction and (possibly) realizes that he’s pointing a rifle at her, it’s too late. He fires a total of 3 shots, sending her to the ground with the first.

He then fires 6 shots at three people who are by the door to the grocery store. Less than a second goes by between his shots on the first woman, and those three additional people.

Immediately after the second volley of shots, he quickly changes direction to the right and fires 3 shots at a man who was already on the ground.

In the suspect’s manifesto, he stated that he would shoot his victims in the head after they’re down, to ensure they’re killed. This is the type of monster this suspect is, and he methodically planned out this attack down to the second.

He continues forward towards the entrance and fires 5 shots through the front window, where he believes armed security to be. As he passes one of his downed victims near the entrance, he fires 2 more shots at her head.

He makes his way into the store and comes upon a number of people to his left, firing what sounds like 9 shots. The live stream starts to break up in spots, likely because of the poorer reception inside the building.

He moves past one of the victims he just shot in an attempt to regroup and get cover behind some store shelving. He appears to reload his rifle at this time as well. Before he reemerges, he fires 1 shot directly into the head of the downed victim.

Upon further inspection of the video, I believe that this woman was not actually shot and was playing dead. There are sounds coming from one of the people on the floor, but it’s difficult to tell which. I believe it could have been the woman who he shot in the head moments after the screenshot below, as she laid there terrified, letting out gasps unintentionally. Unfortunately, this is likely why the suspect decided to shoot numerous victims in the head after the initial attacks.

He makes his way along the registers and exterior wall of the store, and fires at least 2 shots. He then seems to fire 1 shot through a wall, striking someone and sending him to the ground in front of him.

The suspect then comes upon a man hiding between two rows of check-out lines, and the man yells out “No!” with his hands up. Surprisingly, the suspect responds with “Sorry” and does not shoot the man. The suspect then backtracks and that’s when the feed ends.

A note to make at this point; at least two of his victims in the video appear to be white, and he did not hesitate to shoot them, even though his manifesto claims that the incident was racially motivated. When he comes upon the last person in the live stream, who also appears to be white, he does not fire and instead apologizes.

The hard truth is that anyone out in front of the store who ended up being shot had little to no time to react. The suspect had planned and trained for this moment, and he unfortunately made quick work of what he was there to accomplish.

With that said, are you training as hard as he did, to prepare for another person just like him?

People are out there, right now, training to kill you. Are you training to defend yourself?

The suspect mentioned multiple times, in his manifesto, that legally armed citizens were a cause for concern. His choice for New York was mainly due to the state’s strict gun laws, which in part allow only 10-round or less magazines for citizens. He was prepared for armed resistance from concealed carriers, however, and was a large deciding factor when he was choosing how to protect himself. He was allegedly found with body armor, as well as a helmet, to account for any possible resistance during the attack.

If an armed citizen were inside, it likely would have been difficult to get an effective shot on the suspect, given the amount of preparation he had done in terms of protecting himself. With that said, it also likely would have been enough to throw him off his game and make him sweat a little more than he was, at the very least cutting the massacre shorter than he’d planned.

The suspect’s plan, according to the manifesto, was to get back into his car and drive off, shooting people on the street as he drove from the scene. He expected to pass police cars responding to the grocery store, and if time allowed, he wanted to hit another location. Specifically, a nearby Walmart.

Luckily, police were able to stop him before he left the store, a part of the story that is still unclear.

His acknowledgment of armed citizens being one of the larger problems is cause for praise of armed citizens all over the Country. I don’t think it’s a stretch to assume that the suspect would have been less likely to carry out the same attack in, say, Texas. There, he knows that he would have a much higher chance at facing armed resistance from armed citizens.

He knew this, and other criminals know this as well. That’s why crime has spiked in New York over the last (nearly) 10 years since the SAFE Act was passed in the dead of night by now-disgraced then-Governor Andrew Cuomo.

Months of planning seem to have gone into this attack, by an individual who was driven purely by hate.

**If you do not wish to view the video, do not proceed.**

As outlined at the beginning of this article, the decision has been made to provide a link to the recorded live-stream video of the attack. As a final warning, this video is very graphic in nature and one should consider whether or not they are prepared to view such content. The video can be found here.