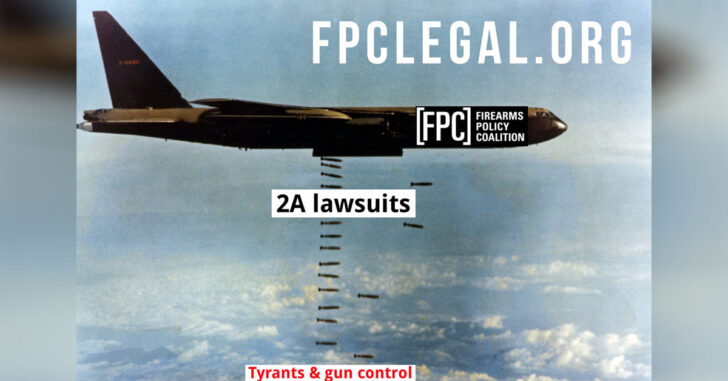 We need people and groups in our corner to make sure that our 2A rights don’t diminish over time. Firearms Policy Coalition, along with Second Amendment Foundation, Citizens Committee for the Right to Keep and Bear Arms and Maryland Shall Issue, announced a lawsuit against Maryland and the right to carry.

Yo, tyrants. We’re the ones your @MomsDemand warned you about. Who are we suing next? https://t.co/6Pp2el4HkP #FPC #FightForward pic.twitter.com/jiRO333lMt

Today, Firearms Policy Coalition (FPC), Second Amendment Foundation (SAF), Citizens Committee for the Right to Keep and Bear Arms (CCRKBA), and Maryland Shall Issue (MSI) announced the filing of a new federal Second Amendment lawsuit that seeks to restore the right to bear arms by making it possible for law-abiding individuals to carry a loaded handgun on their person in public for self-defense in the state of Maryland. The case, Call, et al. v. Jones, can be found at FPCLegal.org.

The State of Maryland’s laws make it a crime for a law-abiding person to carry a loaded handgun outside of the home unless they have been issued a permit to carry a handgun. Further, State law prevents individuals from obtaining a license because of further unconstitutional requirements, such as the “good and substantial reason” requirement, among others. Just like in the Bennett and Greco cases recently filed by FPC, challenging New Jersey’s and New York City’s respective bans, Maryland’s law amounts to a total ban on carry for the average law-abiding person. And consistent with other FPC and SAF cases, the plaintiffs argue here that the Supreme Court’s precedents take that policy choice off the table.

“The Second Amendment protects both the right to keep a firearm in the home and the right to carry a firearm for protection outside the home,” explained Pete Patterson of Cooper & Kirk. “Yet, the State of Maryland prohibits typical, law-abiding citizens from lawfully carrying firearms for self-defense outside of the home. This ban on carrying firearms is flatly unconstitutional, and we are bringing this suit to overturn contrary precedent in the Fourth Circuit and to secure the Second Amendment rights of the law-abiding citizens of Maryland.”

“The State of Maryland’s laws act as a complete bar to the average citizen from being able to carry a firearm for self-defense,” stated Ray DiGuiseppe. “Like several other states that have similar subjective provisions which function as an impossible threshold, Maryland’s ‘good and substantial reason’ cannot pass constitutional muster. This suit seeks to place all of Maryland’s citizens on equal footing when it comes to the ability to exercise their natural right to self-defense outside of the home.”

“Maryland’s laws, such as its ‘good and substantial reason’ requirement, destroy the right to bear arms in public, and by so doing, violate the Second and Fourteenth Amendments,” explained FPC’s Adam Kraut. “As the Supreme Court has already held, the enumeration of the right in our Constitution takes that policy choice off the table. Maryland, like all states, must respect the fundamental, individual right to keep and bear arms and allow law-abiding people to carry loaded, operable arms in public for all lawful purposes.”

“Anti-gun Maryland officials have been using this dodge for years,” said SAF founder and Executive Vice President Alan M. Gottlieb. “By setting this arbitrary standard, state bureaucrats have been routinely denying Maryland citizens their right to bear arms. The state cannot be allowed to continue this discriminatory practice because it essentially gives public officials the power to deny someone’s fundamental, constitutionally-protected rights on a whim.”

“On behalf of our members, Maryland Shall Issue, Inc. is proud to announce that we’ve partnered with the Firearms Policy Coalition, the Second Amendment Foundation, and Citizens Committee for the Right to Keep and Bear Arms in bringing a new legal challenge to Maryland’s unconstitutional ‘wear and carry’ permit requirements,” said Maryland Shall Issue President Mark Pennak. “The ‘good and substantial reason’ requirement for issuance of a permit imposed by Maryland law has long been used to effectively disqualify the vast majority of law-abiding Marylanders of their right to carry a handgun for the lawful purpose of self-defense. The time has come to end Maryland’s subjective and discriminatory law and regulations. The people of Maryland have a fundamental right to protect themselves in public.”

“The right to bear arms is not a second-class right nor a mere privilege that only some lucky people are ‘granted’ by the government on a case-by-case basis,” said FPC President and FPF Chairman Brandon Combs. “It is constitutionally and morally offensive for the Maryland government to criminalize the exercise of this fundamental human right. The Constitution itself provides the only justification necessary for law-abiding adults to exercise their fundamental, individual right to bear arms in public. FPC will proudly fight to restore the full scope of the Second Amendment in the Old Line State and throughout the nation in this and other cases.”

Previous article: Dispute Over Dog Leaves 8 People Wounded by Gunfire in Downtown Music City Next article: Tampa Police Chief Concerned With Spike In Shootings That Have Plagued The City In 2020