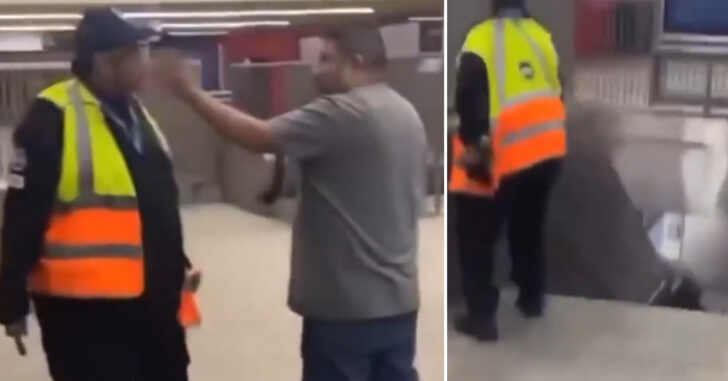 One man is in jail, and another man is in the hospital after a verbal argument turned physical in a Chigaco train station this past Saturday morning.

Two men were in a Chicago train station around 2 AM Saturday and approached a customer service kiosk to ask for directions. Those two men got into a fight, and one of the two transit authority employees that were in the kiosk called the police.

The police put one of the men on the train, and the other one who winds up being the victim in this incident didn’t get on the train, saying he was waiting for someone to pick him up.

The man was reportedly intoxicated, began making threats to the employees in the kiosk, and was combative with other innocent bystanders. That’s when one of the employees left the kiosk to confront the intoxicated man with a hammer in his hand. They got into a verbal altercation, and the man pushed the employee to the ground. The video doesn’t capture this part, but it is reported that the employee tried to hit the man with the hammer, who then kicked the employee in the head.

As the employee got back on his feet, the intoxicated man walked away, heading down an escalator. The cellphone footage captured shows the employee taking a gun out of his pocket, walking to the top of the escalator, and firing 11 shots at the man. The victim was hit in the back, abdomen, and lower right leg and is expected to survive.

The employee walked back to the kiosk and told his co-worker that “his life was over.” While he did have a valid FOID card which is required to possess firearms or ammunition in Illinois legally, he did not have an Illinois concealed carry license. He was charged with attempted first-degree murder, aggravated unlawful use of a weapon, and held without bail.

There’s obviously a lot that went wrong in this incident. I bet the employee wishes he had stayed inside his kiosk and just called the police, who were just there diffusion another fight the victim was in. But he decided to grab a hammer and take matters into his own hands. He was a customer service employee, not a security guard. He should have stayed put and let the police deal with it.

Then there’s the fact that he wasn’t supposed to be carrying a concealed gun in the first place. And, of course, the big issue here seems to be his ego getting the best of him and shooting the man in the back as he fled. And he obviously knew that he wasn’t justified in shooting the man, telling his co-worker that his life was over.

We talk about this all the time. You have to control your anger and your ego. And if you can’t, then maybe carrying concealed isn’t for you.

Previous article: Will Smith Can Commit Assault And Still Win An Award And Give A Speech 10 Minutes Later Next article: Concealed Carrier Fatally Shoots Armed Robber Holding Co-Worker at Gunpoint