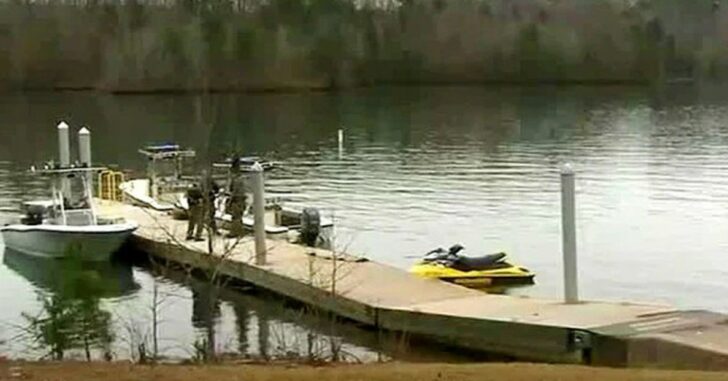 SALEM, SOUTH CAROLINA – A man was fatally shot by another man who had just rescued him from a lake.  The strange chain of events occurred in Lake Keowee, an 18,500-acre lake with 300 miles of shoreline located in the northwest corner of the state.

The deceased was identified as Nathan Morgan. According to the Oconee County Sheriff’s Office, Morgan and an unidentified woman were ‘in distress’ on a jet ski on the lake Tuesday. Another couple enjoying the day on their pontoon boat spotted the pair and drove over to offer assistance, helping them to get off of the jet ski and onto the pontoon boat.

For unknown reasons, Morgan then began assaulting his rescuers. In an attempt to intervene, the woman who was with him pushed him off the boat and into the water. Morgan boarded the pontoon boat again and resumed the assault on the couple. Fearing for their lives, the boat owner shot Morgan in the chest, killing him.

According to the OCSO, the case was reviewed by 10th Circuit Solicitor David Wagner who determined that the shooting was indeed a clear-cut matter of self-defense. As a result, no charges will be filed against the boater who rescued Morgan and his companion.

South Carolina has a stand your ground law, as this story illustrates, which is valid even when there is no physical ‘ground’ to stand. A person has the right to defend themselves with lethal force, without the duty to retreat, in any place where they have a legal right to be, and it is reasonably necessary to prevent death or great bodily injury to themselves or another person.

Previous article: Man Shot In The Groin After Drawing From The Drop Next article: Death By Firing Squad Now An Option For South Carolina Death Row Inmates