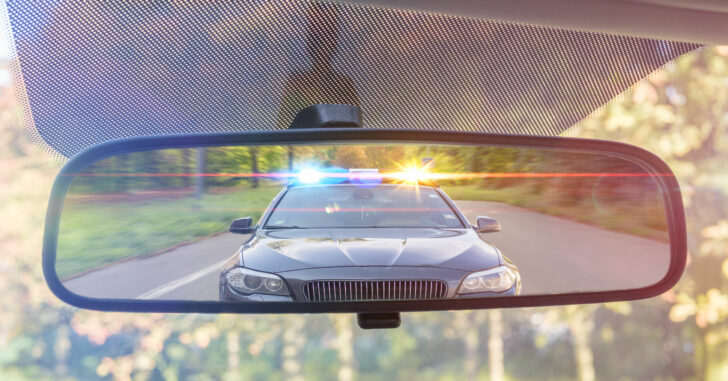 The traffic stop while carrying concealed is a topic that we’ve covered extensively in the past, and it still brings questions from people who are new to concealed carry. There is a nervousness that sometimes comes along with the pair together (interaction with police while carrying) and it’s understandable to a certain degree.

But if you follow a few simple ‘unwritten rules’, the encounter should be a smooth and even pleasant experience… assuming you don’t get a ticket.

Police are here to protect and serve, and they do a fine job with that. The job, however, comes with hazards that most jobs don’t. Each day, they are faced with bad guys, and some of those bad guys wouldn’t think twice about doing harm to an officer. Until the officer can determine that you aren’t a threat, a heightened alert on their part could be present at the beginning of the traffic stop.

To make it easy and simple on both yourself and the officer, here are 5 things that you should immediately do when you’re pulled over while carrying your firearm:

We’ll kick this off with a few things that you should be doing regardless of whether you’re carrying a firearm or not. Having these three things completed before the officer walks up to your vehicle are all signs that you have nothing to hide.

Turning your engine off shows that you aren’t about to drive off in a hurry. Putting your window down just makes it easier and safer for when the officer walks up. If you have to put your window down as he or she is next to your vehicle, your hand will be out of sight for a moment. It’s best to be prepared and have this step complete ahead of any interaction. And the dome light at night, well, that just gives the officer a clearer view of the inside of the vehicle so that they know what they’re walking up on.

#2 – Have Your Permit Ready

When you’re pulled over, the common approach is to hand the officer your drivers license, registration, and proof of insurance. Along with those items, it’s a good idea to also hand over your concealed carry permit. While handing these documents to the officer, let them know that you have your permit and that you are carrying. The recommended terms go something like this:

Here are my documents, as well as my concealed carry permit. I am carrying right now. How would you like to proceed?

These few sentences will let the officer know that you are being upfront and honest, and it’s likely to be greeted warmly. Their response will likely be one of the following: “Where is the firearm?” or “Great, thanks for the info.” Giving them the information and then asking them what the next step is could also get you out of that ticket they were about to write 😉

If you live in a state that does not require you to have a permit, simply state to the officer that you have a firearm on your person and ask how they would like to proceed.

This is as old as driving, and should be incorporated in this case just as any other. Having your hands visible is such an important thing during a traffic stop because at the beginning, the officer doesn’t know you or what you could be up to. Remember; don’t take it personally. It’s a courtesy to the officer as far as we’re concerned, and it’ll be appreciated.

Take the first step above and now add the second. After you hand over your documents and say what you have to say, throw those hands back up on the steering wheel.

#4 – If Any Passengers Are Armed, Have Their ID & Permits Ready

Just as you provide documentation to the officer, some will also want documentation for any passengers inside your vehicle. If any of your passengers are also carrying a firearm, it’s recommended to have them get their ID and permit ready as well.

“Hey! No sudden movements!!” Each of these five points are here to ensure a safe and comfortable interaction for all of those involved. Moving slowly is another key point to be made, and these slow movements should be done from the start of the traffic stop… all the way to the end.

Remember that the officer has a job in which he or she comes into contact with dangerous people at times, and it’s their right to feel safe during a traffic stop. Following these easy steps ensures that they will feel safe and comfortable with you, and sets you up for a near-flawless traffic stop.

There’s no reason to be nervous if you aren’t doing anything wrong, so don’t forget to relax. Who knows; the whole encounter could end with a 10 minute conversation about your favorite carry gun.

Previous article: If You Call Police For Help, Don't Have A Gun In Your Hand When They Show Up Next article: 3 Dead, Including Child, After A Shooting Inside Publix Supermarket In FL