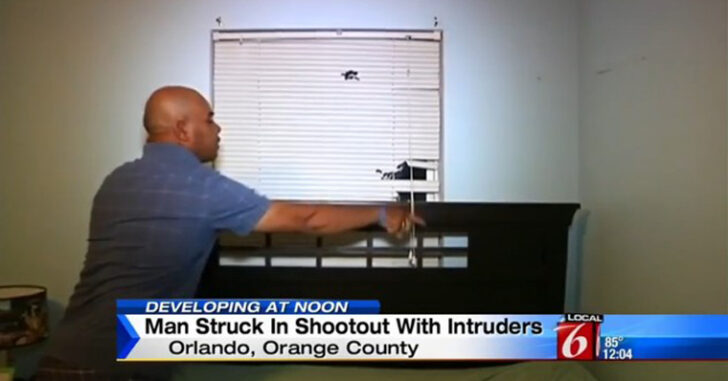 ORLANDO, FLORIDA — A homeowner was struck with a bullet after being forced to use his firearm in self-defense after two intruders broke into his home.

Police say it happened Tuesday night when the homeowner was home. Two men broke into the home, and that’s when the shootout began. The homeowner is said to have been struck once by gunfire. He later drove himself to the hospital for treatment.

It is not known if either of the suspects were hit, but the homeowner is confident that he hit at least one of them.

An unwanted side effect happened when a few of the bullets went through the window of a neighbor’s house.

“I thought it was somebody threw a brick or something, but I heard a gunshot and it could have killed me,” Sabita Parsaram said.

Parsaram said her family was uninjured but shaken after the close call.

As I get further into the article, a sentence pops up and makes me wonder what the details really are that surround this incident: Orange County deputies said the victim knew the intruders and does not want to press charges.

I’m not going to speculate, but I don’t like seeing that.

Previous article: The Dark And Rare Side Of Concealed Carry Permit Holders: 8-Year-Old Gains Access To Gun, Shoots Self In Finger Next article: Is the Burden Too Great? Responsibility and CCW