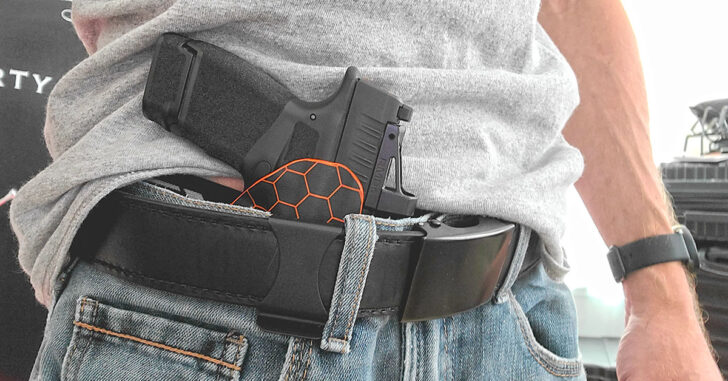 Ahh, freedom. We’re able to buy (almost) whatever firearms we want, carry them around (only if permitted in many cases), and use whatever magazines we want (restrictions may apply).

Ok, we have some things to fix.

In the meantime, I’ve spent 9 baby-making months with the Springfield Armory Hellcat and have been carrying it daily. The verdict is due: How legit is it?

The fact that it’s been my sole carry gun for the better part of a year now is telling enough. Most of that time has been appendix carry, a carry position which I’ve loathed until recently.

There have been a few occasions where it’s been uncomfortable, with every one of those times being when I’ve bent down to get something. If I move the wrong way or too quickly, I can have the grip dig into my gut/ribs.

That has nothing to do with the gun, however. This thing is so incredibly easy to conceal, and the slim profile makes it disappear with a simple t-shirt.

I have two Hellcats: The original and the OSP models. I’ve opted to carry the OSP, because, well, red dot. The 13-round magazine always comes along for the ride as well.

Between the two, but more with the OSP, they have thousands of rounds through them. With the original, I had 2 FTF (failure to feed) that I chalked up to bad ammo, because it was literally the only two that were these off-brand rounds that I found laying around one day. The same rounds gave my Glock 19 troubles.

Aside from the capacity (13+1 with the extended mag), I’ve continued to be in love with the grip. Some love it, some hate it, just like anything in life. The texture helps to give extra grip when squeezing, and you can actually feel the little peaks dig into your palm. Not in a painful way, either.

I have sweaty hands, and it’s done wonders for my shooting ability compared to other handguns with grips that I tend to slip and slide on (cough Gen 3 Glocks).

This baby is here to stay, and I can’t recommend it enough. If you haven’t yet, give it a whirl at your local range and see if you’re convinced.

Also, why not try to win one! We’re giving away 10 Springfield Hellcats as part of a HUGE giveaway going on right now. To enter, hit this link.

Previous article: BREAKING: Driver Shot While Attempting To Drive Through Crowd Of Protesters Next article: FL Sheriff: I'll Deputize "Every Lawful Gun Owner In This County" If Violent Protests Come This Way