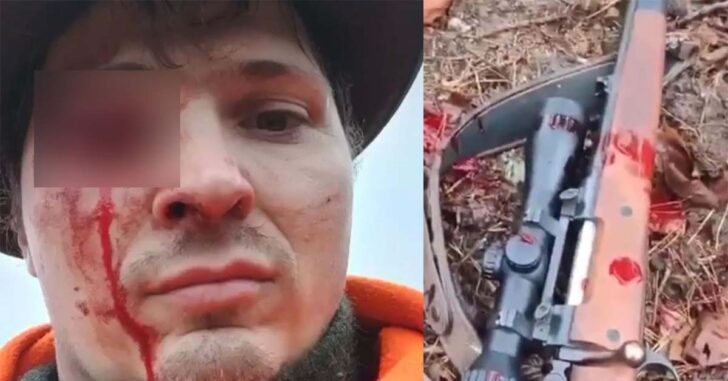 A hunter was out in the woods doing his thing when a big deer with big antlers came charging at him. It’s a strategy that may catch on with other deer, as one commenter noted, because it was successful.

The video of the charge and impact is the first one up, and I guarantee you it gets worse from there.

The hunter, who has not yet been identified, seems to have took photos of the incident’s aftermath, and it’s not pretty. He seems to have taken an antler right to the eye, and to be honest, he’s lucky that he’s still breathing.

The gallery kicks off with his eye just after the injury, and follows through with some photos from the hospital after being put back together as best the doctors could.

Facebook and Instagram usually shield graphic content with an overlay, but they haven’t done so yet with this one as of this writing. So if you’re squeamish, the time to turn around is right now.

Really, don’t keep scrolling if you have a hard time with the sight of blood and gross eyeball stuff.

Previous article: Armed Citizen Tries Stopping Shoplifter, Ends Up Being Shot With His Own Gun Next article: Man Shot After Breaking Into Relative’s Home For The Third Time