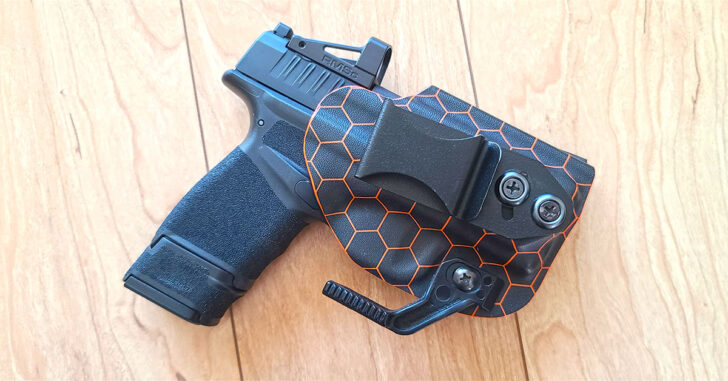 First off, this is not a paid endorsement. Springfield has advertised with us for years, but one thing that we never do are paid reviews or paid follow-up articles on products. They don’t even know that I’m writing this.

The best information comes from people who put content out on the interwebs with no handshaking behind the scenes, and no money being exchanged. With that, if it turned out that the Hellcat was a POS after 2 years, I’d tell you that as well.

But it’s not. It’s been my primary carry firearm since I received it back in 2019.

When it was launched, it came with an 11-round and 13-round magazine. That was an amazing feat in such a small package, and then a little while later, Springfield released the 15-round magazine for the Hellcat. Adding just a little more height to the grip, it was still comfortable to carry, and I’ve been using the 15-rounders since receiving them.

If you haven’t seen it yet, we teamed up with USA Carry and put the Hellcat through a 10,000 round +P Torture Test. It was a torture test for us as well, because it was smack in the beginning of Covid and took us a while to complete. We shot in the cold, the heat, and our hands had seen better days. In the end, we had less than 1 failure per 1,000 rounds fired, with 9 total failures. To make things for the Hellcat even better, we attributed the majority of those failures to shooter fatigue.

I Keep Coming Back To It

I’ve posted some updates along the road while carrying the Hellcat, and still haven’t had anything negative to say about it. It functions, and it truly feels great in the hand. To-date, it’s the most comfortable handgun to hold for me, and that’s by a longshot. They really nailed the grip texture and ergonomics.

You Voted It The best

In 2020, I went to the Springfield Armory booth at SHOT Show in Las Vegas with an award. Through your votes, the Hellcat was named Best Concealed Carry Handgun of 2019.

Since the release of the Sig Sauer 365, companies large and small started developing and releasing similar-type handguns. That’s what people want now; compact, high capacity. Concealed carry is the fastest-growing segment in the firearms world, and it won’t be stopping anytime soon.

Even with all of the new releases in this category, and while some are excellent choices, the Hellcat is the King in my book.

And with that, I’ll carry on. With the Hellcat.

Previous article: Customer Pulls Gun On Chipotle Employee Because Her Food Was Taking Too Long Next article: Man With Rifle Chases Down Truck Thief Suspects, Opens Fire And Kills One