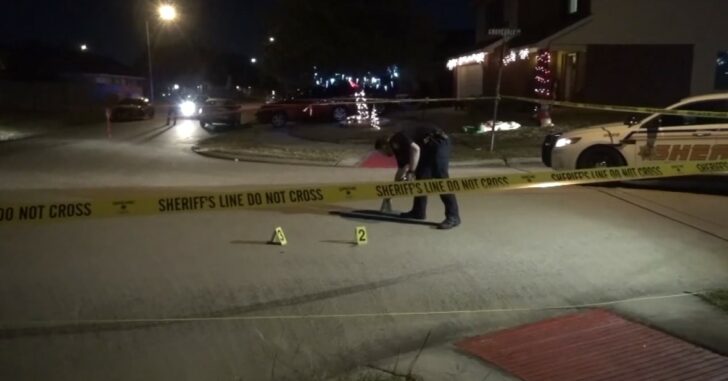 HARRIS COUNTY, TEXAS – Gunfire erupted in a neighborhood north of Houston on Christmas evening, leaving one man dead in and altercation between neighbors over parking. According to the Harris County Sherriff’s Office the incident occurred in the 1100 block of Sawgrass Ridge Lane around 7:30 p.m.

A man called the sheriff’s office from a nearby truck stop and surrendered himself and the gun he said he used.  He told responding deputies that he and a neighbor were involved in a dispute over parking and that he was approached by several men with guns. He stated that he fired his weapon for fear of being shot himself.

“As of right now, we’ve made the determination that the individual who shot the deceased male is making a claim of self-defense,” said Sgt. Jason Brown.

Deputies identified the man who was shot and later died at the hospital as Roderick Livingston, who they believe was in town visiting family for the holidays.

Some of the shots that were fired at the shooter who called authorities allegedly came from Paul Jones, who was arrested and charged with aggravated assault with a deadly weapon. Kati Mack, reportedly the girlfriend of Jones, was also arrested. She is accused of attempting to hide two firearms used by Livingston and Jones.

The shooter who reported the incident has not been charged yet, as it appears that this may be a case of self-defense. It will be referred to a grand jury.

Had the man not been armed when approached by the armed men, he may have been seriously injured or killed. Instead, he was able to defend himself against multiple assailants.