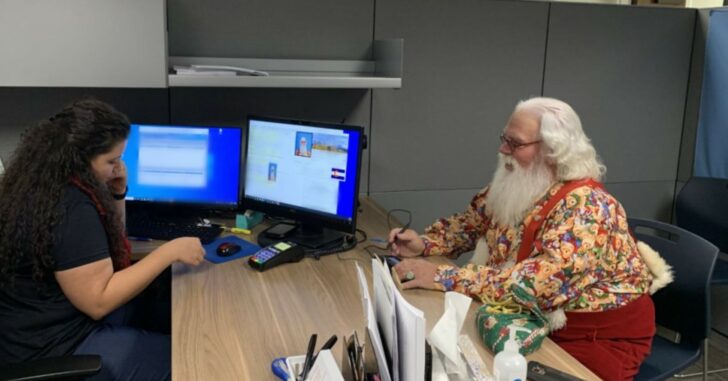 Guess who came in to receive his Concealed Handgun Permit today? 🎅

Did you know the El Paso County Sheriff's Office has issued 49,750 Concealed Handgun Permits with another 2,560 awaiting to be issued?

El Paso County is home to 720,000 people (2019), which would make for roughly 7% of the population with concealed carry permits.

Some responses to the image came in the form of bad timing, referencing the recent school shooting that involved a 15-year-old and a handgun.

I understand where Joseph is coming from, but I struggle to see the connection. A teen, illegally in possession of a handgun, used that handgun to commit a terrible crime. A person with a concealed carry permit, on the other hand, goes through the process of legally acquiring handguns with a main purpose of obtaining that concealed carry permit for lawful self-defense.

These two are not the same.

Patricia, on the other hand, realizes the lengthy process of acquiring a permit.

Bad Hombre Resistor is getting El Paso’s mixed up, but that’s alright. It’s still another poor example of two things that are not the same. Santa (aka the average American), with his concealed carry permit, is not likely to go on a shooting rampage.

The piece of information that’s always missing from these arguments is that millions of gun owners don’t do anything illegal with their firearms each and every day, just the same as millions of people drink alcohol each day and don’t drive drunk.

It always comes down to responsibility, and it always will.

The Sheriff’s officer responded to the complaints, and it makes sense to me. I sense an undertone of annoyance, because it seems nowadays everything is offensive, but I could be wrong.

Here’s the absolute takeaway in my opinion: With the state of everything that’s going on, having more lawfully armed citizens will make everyone safer. Period. The end.

Previous article: "I'm Glad I Had My Gun With Me." Chicago Concealed Carrier Survives Armed Carjacking Attempt Next article: Why We Carry: Man On Parole Crashes Stolen Truck Into Church, Breaks Into Home And Stabs Two Occupants