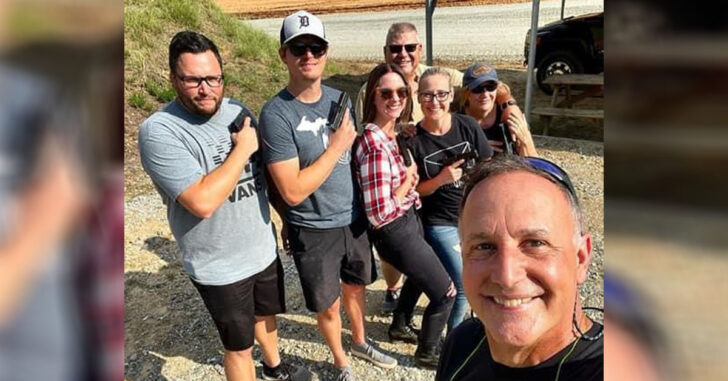 Update: A few hours after this article was published, but unrelated to this article being published, Sootch00 posted a video on Instagram that owned up to the picture, stating that it was his fault and going through what happened that day.

While I can appreciate the video post, I still have to a hard time letting things like this slide from wide-reaching people in our industry. It’s an industry where mistakes can kill or injure people, and it’s also an industry that is under constant scrutiny. We have to do our best, at all times.

It pains me to tag a member of our own industry as an Irresponsible Gun Owner, but here we are.

If I ever do something negligent, whether you see it in person or it’s posted, I expect for someone to call me out. Maybe it was an oversight or I wasn’t paying attention, and understanding what happened is a good step towards correction that negligence.

We’ve all done it before. Flagged someone with the muzzle of our firearm, pointed it in a not-so-safe direction, etc. But most learn from these mistakes once they realize what they’re doing.

If you don’t know who Sootch00 is, he’s a popular YouTuber in the gun space with over 1 Million subscribers. He mainly focuses on gun reviews, but mixes in a healthy amount of other content as well.

He’s also a firearms instructor, and during a recent class, he posed for a picture with students and sent that baby out to the internet, where things are never forgotten and never really removed even if you hit the delete button.

How many things can you find wrong with this photo? That guy in the back with the handgun pointed directly at him is probably the worst, and where his gun is pointed isn’t much better. There is no way that this photo was set up without every single one of these people pointing their gun at someone else.

While some blame does lie with the students, the majority lies with the instructor for allowing such things to happen. I’m under the impression that they are all new shooters, and while that doesn’t excuse unsafe gun handling, we’re making a different point here.

To not only take this photo, but to publish it to social media as an influencer and firearms instructor, is absolutely irresponsible. It’s since been deleted, but I’m not done quite yet. There were comments.

Sootch00 literally responds to a commenter who called him out with, “They were all pointed in a safe directions and trigger discipline was perfect. Stop being a troll and take a new shooter to the range.”

To have this kind of statement out of such obvious and dangerous negligence is impossible to comprehend. Facing backlash, the posts were removed, but the internet remembers. Further, I haven’t seen any statements from Sootch00 since the fiasco, about the fiasco.

There is no owning up to this negligence.

Scrolling down the sootch_00 Instagram page, it didn’t take me long to find more negligence. This one, apparently of himself and his mother-in-law, shows the handgun pointed right at him. The slide is back, but that’s irrelevant. The 4 Rules, bro. Please learn them.

One comment above in particular, calls this out. But it’s almost in a joking kind of way, as if the commenter doesn’t actually see it as negligence. Sigh.

A few years back, Sootch00 is the guy who shot the hood of his truck in a video that he published. He didn’t mean it, and kinda owned up to it. After something like that happening, I’d think that firearm safety should be very high on his priority list.

According to the ‘About Us’ section of his website, they’re all about promoting gun ownership among other things, but he should probably say something about gun safety.

I don’t think he’s there yet, though.