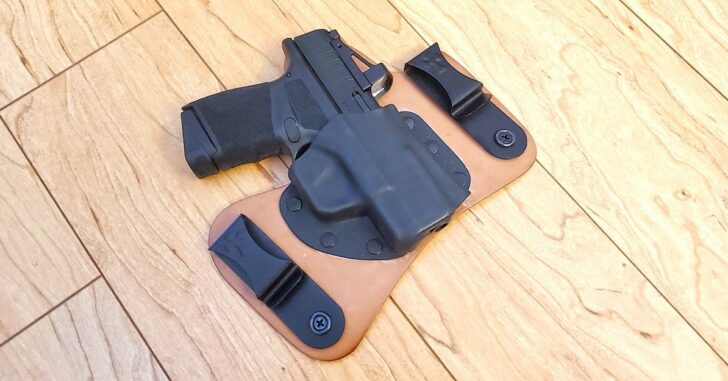 My original Springfield Armory Hellcat came in early October, and then my OSP version came a few weeks later. I received a holster from CrossBreed Holsters that I started using right away, and spent many hours at the range with the Hellcat to put it through some paces.

After shooting, carrying and living with the Hellcat for almost 3 months now, here are my honest to God thoughts and impressions on this offering.

There’s no mistaking that Springfield put a lot of attention and detail into the Hellcat. This was a very well thought-out concealed carry gun, of which has been the most comfortable for me to carry. Ever.

The size is said to be a little small among people with large hands, but considering that I have average-sized hands, it’s a perfect fit for me. It’s always going to be a ‘to each their own’ scenario, but for me, it’s everything that I want in a grip for a daily carry gun.

I wasn’t sure if I would get tired of the grip texture, which consists of peaks and valleys that are meant to dig into your palm when you apply pressure. I liked the idea in the beginning, and still like the implementation. I have sweaty palms, and this grip truly helps out by keeping my hands where they need to be.

It’s been over 2,500 rounds now with my OSP model, and that’s the one I’ve been carrying for the last 2.5 months. It’s my first time carrying with a red dot, and I can’t believe that I’ve been missing out for so long.

The sights on the Hellcat are, honestly, a little ‘meh’ after using them for a few months. The concept is nice, but I’m still not completely on board with that U-dot setup.

One of my favorite things about the gun is the same style texture that they use for the grip, located where your index finger should rest on the frame when you’re keeping that finger off the trigger. It’s in the perfect stop for me, and gives me a distinct feel that lets me know I’m in the exact position that I should be in. It’s a small thing, but goes a long way.

Overall, I’ve been extremely pleased with this new offering from Springfield. It’s a great carry gun, has an excellent capacity for such a compact size (11+1 and 13+1 with extended magazine), and has not given me a single issue to date.

It’s a serious contender to others in the category, such as the Sig P365, which took the industry by storm in early 2019.

Have you seen/shot the Hellcat? Bought one? Thinking about the purchase? Share your thoughts below.

Previous article: What Not To Do: Concealed Carrier Opens Fire In Walgreens, Shoots Robber Fleeing The Store Next article: Hornady's Outfitter Ammunition Is Worth The Look