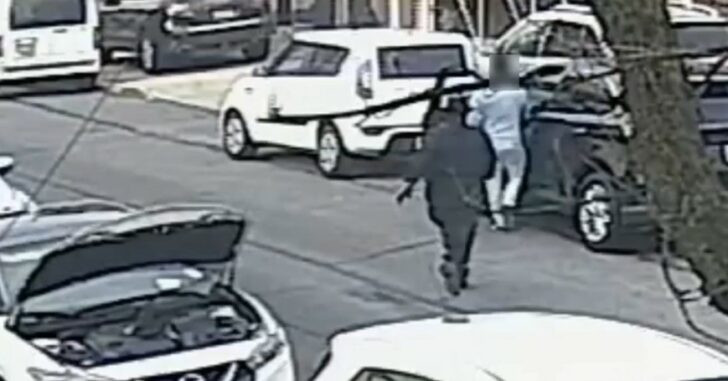 QUEENS, NEW YORK — A man walking to his car was gunned down from behind by a killer who seemed to be waiting for his victim to arrive. Police have little information to go on but if I were a betting man, I’d say that this was a planned thing.

The Nissan’s hood is up, and the gunman grabs something from what appears to be a bag in the engine compartment as the 46-year-old victim walks down the street behind him.

As the victim opens the driver’s door of a black SUV, the gunman runs towards him and opens fire, video shows.

The victim slumps over the drivers seat and the gunman runs away and into his vehicle, taking off in a hurry.

When police arrived, the found the victim deceased in the vehicle with multiple gunshots to his head.

Police are still searching for the man and the vehicle.

In New York City, only the powerful and rich are allowed to carry firearms to defend themselves, as the average Joe isn’t responsible enough to do so (in the city’s eyes, of course). Even if this victim did have a firearm, it’s likely the outcome would have been the same. The victim likely didn’t see any of this coming, up until the very end. With no time to act, a defensive tool would have proved useless.

As a reminder, practice keeping your head on a swivel, and be as aware of your surroundings as you possibly can be, without moving into paranoid territory.

Anyone with information is asked to call Crime Stoppers at 1-800-577-TIPS.