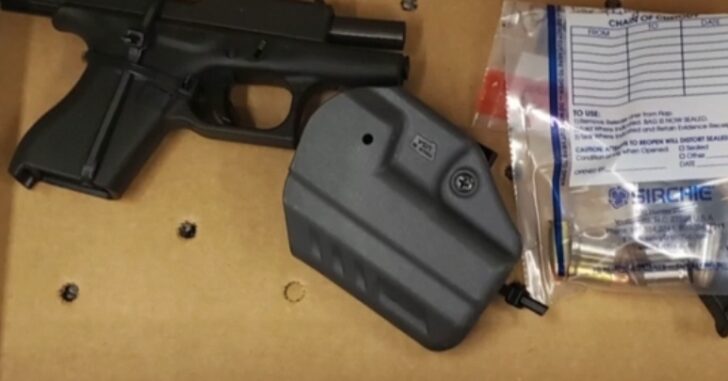 KITTY HAWK, NORTH CAROLINA – Police in the vacation destination of Kitty Hawk recovered two semi-automatic pistols in the same day; one was left in a nightstand drawer in a vacation rental home and the other was left under a mattress in a hotel…and it’s not the first time. In fact, the KHPD has responded to nine calls this summer alone for guns found in rentals and hotels.

According to Detective Sergeant Brian Strickland, “Most of the time, it’s a cleaning company that finds the gun,” adding that most of the time the guns are “fully loaded, ready to go, and they don’t even know they left it.”

For example, “There was a gun in a house for several months in a nightstand. Come to find out the person had rented the house like three or four months earlier. It’s just that nightstand was never opened, but that gun was there the entire time.”

After Strickland tracked down the owner and contacted him, “He was emphatic that he had his gun.” Strickland told the man the manufacturer and model of the firearm, adding that the ATF had identified him as the owner. The man still insisted that he had his gun in his possession, yet “then he finally went and looked for it, he couldn’t find it,” said Strickland.

In another case, a KHPD officer located a gun on the side of N.C. Highway 12, the road that connects the many vacation destinations along North Carolina’s Outer Banks. When they tracked down and contacted that owner, by the department, the owner said, “Oh, I know I had lost it, but I didn’t know where I had lost it.” The mishap occurred when the owner laid the gun on top of their vehicle and drove off.

In nearby Onslow County, a WRAL photojournalist found a loaded gun on top of the toilet tissue dispenser in a gas station restroom.

Strickland speculates that an unknown number of guns in his jurisdiction and others across the country probably haven’t been found yet. His main concern, and a well-founded one, is safety and what could happen if a child finds a gun. “Then we have an accidental discharge, and somebody gets hurt or killed,” said Strickland.

Policies vary from one agency to another, but in Kitty Hawk, the police department takes custody of the firearm, seizes the ammunition, and attempts to identify and contact the owner.  The owner is required to appear in person to retrieve the gun, and they are offered a free gun lock.

Responsible gun ownership means knowing where every firearm that you own is at all times. Misplacing a gun in your home or vehicle is one thing (still not good, but leaving a loaded gun in a location where it may be found by a child, irresponsible adult or even a criminal…days, week, months or even years later is pure negligence.

Those who are committed to the concealed carry lifestyle, that is those individuals who carry concealed every day from sunup to sundown, usually have a very good presence of mind regarding their firearm. Those who only carry a gun occasionally or those who carry off-body, such as in backpacks, duffel bags, fanny packs, purses, or other means are usually less aware of their gun’s location at any given moment, which makes leaving a loaded firearm behind a higher probability.

With millions of new gun owners in the last two years alone, many are first timers who have absolutely no experience or training in the safe handling and storage of firearms. To protect the public, police suggest that travelers add some gun safety measures to their checklist.

“If you’re going to take your handguns with you or any guns with you, make sure they’re locked up, and don’t leave them,” Strickland said. He suggested that gun owners tell someone in their traveling party about the gun or set a phone reminder for the last morning of vacation to remember it. Those staying in a rental home or hotel should check all drawers and other common ‘hiding places’ upon arrival, and call police if a weapon is found.

Previous article: Quick-Thinking Neighbor Shoots Couple’s Dog To Save Their Lives Next article: Home Invasion Suspect Shot by Resident After Breaking Into Apartment