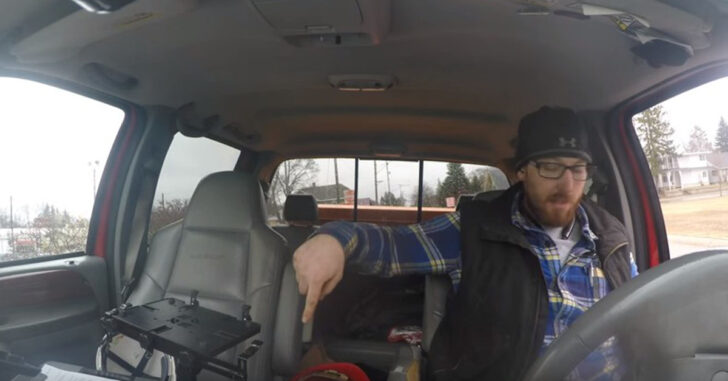 I’m not going to pull this vlogger apart, but there are a few things that are worth pointing out when discussing a traffic stop and concealed carry. This man was vlogging about a completely different topic, when he was pulled over for going through a red light. While I was watching the video, I noticed a few details that could be improved upon when dealing with a similar situation. For bearings, start watching the video above around the 2:45 mark. We’ll point out the times in the video when we’re making some points below. 3:09 – At this point in the video, the man just pulled over and is opening his glove compartment to get his registration and proof of insurance. It’s a debatable process when carrying, but just remember if you’re going to reach over to the glove box that you do so before the officer gets to your window. If you want to wait for them to come up, that’s ok too… just make sure that your firearm isn’t in the glove box as well. If you pop that thing open with the officer watching and he or she is unaware of that firearm, things could turn bad quickly. 3:25 – The man is rummaging through papers in his lap as the officer comes up to the window. This is ill-advised, as the officer isn’t able to see your hands. Placing them on your steering wheel so that the officer has a clear view of your hands is the best bet. It assures them that you aren’t reaching for anything, and also assures them that your hands are indeed empty. 4:30 – This is the moment that the man tells the officer that he has his concealed carry permit, and that his Glock is inside the glove box. The officer doesn’t seem to mind, and makes a comment to the effect of ‘If you didn’t want me to know you had it, you wouldn’t have mentioned it.’ Most officers seem to react this way, and seem to appreciate being told that there is a firearm inside the vehicle. After the officer knows of the firearm, the two have a brief conversation about Glocks. The traffic stop continues like nothing happened. One thing that I will point out with this man’s approach to telling the officer about the firearm is this; It’s best advised to inform the officer at the beginning of the traffic stop, just so there aren’t any surprises. Many argue telling the officer at all, but I feel it’s common courtesy to let them know. They face a lot of challenges each day, and it’s nice to see a friendly and armed face once in a while. Also to the vlogger, who mentioned that he was pulled over not too long ago for speeding: Slow down, and watch those red lights! (Also, wear a seat belt)
Category: General