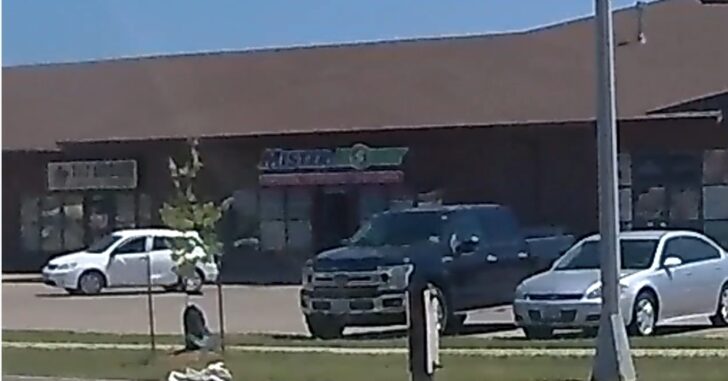 FARGO, NORTH DAKOTA – A pawn shop employee who fired multiple rounds at an armed robbery suspect’s vehicle has been charged with misdemeanor reckless endangerment following an incident that occurred on June 10th.

Kyle Mac Ramsey, 56, of Fargo, is accused in a court complaint of firing multiple times at a car driven by Hunter D. Havisto as it sped away from the Mister Money pawn shop, located near Cash Wise Foods on 13th Avenue in south Fargo.

Ramsey, along with the business owner and another employee were inside when a man entered with what appeared to be a gun and demanded money. Video footage taken from a camera across the street shows a person that police say is Ramsey running out of the store’s front door and firing a handgun at the alleged robber’s fleeing vehicle, with seven shots audible on the recording.

Havisto, 21, was arrested later in the day and charged with the robbery. There was evidence that the car was struck several times, with at least six bullet holes visible in the passenger side front and rear doors, but the suspect was not injured. Police had already been searching for Havisto for several days, as he was already a suspect in several other offenses. In addition to the Mister Money robbery, he also faces nine other charges for crimes including robberies, burglaries, and vehicle thefts.

Following the incident, Mister Money owner Daryn Kapaun said that his employee was not trying to hit the fleeing robber but was simply trying to make the vehicle more noticeable to the police. Many in the community are outraged that Ramsey has been charged, saying that he should have received a medal instead.

The sentiment would probably be the same if he would have shot and killed the fleeing suspect, but the legal consequences would likely have been much more serious. It would be difficult, if not impossible to convince a jury looking at a half-dozen or more bullet holes in the passenger compartment of a vehicle that that there was no intent to injure the occupant.

In most states and situations, only law enforcement officers are legally justified in shooting fleeing suspects, and then only under certain circumstances. A civilian shooting of a fleeing suspect is often viewed and charged as assault with a deadly weapon, attempted murder, manslaughter, or second-degree murder.

All responsible gun owners should make it a priority to learn your state’s laws concerning the legal defensive use of your firearm. If used illegally, the social media court of public opinion means nothing, while the court of law can have life-altering implications for you and your family. Think before you shoot.

Previous article: 3 Killed, 2 Injured After Argument At Bar Leads Suspect To Come Back With Rifle, Suspect Still At Large Next article: Woman Stabbed on Greyhound Bus During Dispute with Male Passenger