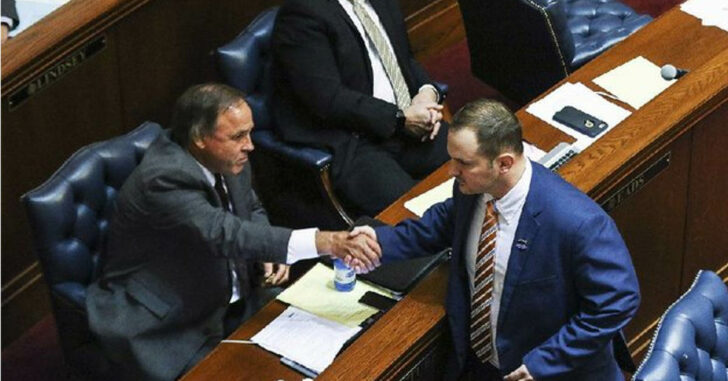 LITTLE ROCK, ARKANSAS — It all started as a push by legislators to remove the ‘opt-out’ clause that allowed state-funded universities and colleges to designate themselves as ‘gun free’ zones. By the time House Bill 1249 made it through in a 71-18 vote, it transformed into something else entirely.

As the reporters at Arkansas News report, the final form of the bill approved by both the House and the Senate allows any concealed carrier to pursue an additional eight hours of training in order to carry his concealed handgun onto any state-funded institution of higher learning.

But that’s not all!

Now, bars, churches, and even private colleges are all open to concealed carriers so long as they do not post signs explicitly requesting no firearms.

Corrections, pre-K, K-12 schools, and courtrooms are all still off limits to law-abiding gun owners. Additionally, no gun may be carried onto a university campus where a hearing is being held for a disciplinary action or grievance so long as everyone entering the campus is given 24 hours advance notice of the hearing or proceeding.

As for the eight hour training requirement, it will be headed up and developed by the Arkansas State Police. For those whom have completed a concealed carry firearms-related course within the past ten years, they may waive four of the eight required hours.

In my mind, this constitutes a fine middle ground. Whereby prior attempts to allow faculty and staff to carry concealed onto universities was met with “workarounds” by university administrators, this law removes that capacity entirely. Furthermore, it allows the gun owner to make sensible decisions about where he or she wishes to carry a concealed handgun.

So long as notification hasn’t been made by the college or university, the gun owner has an almost unilateral choice as to where he carries.

The bill, modified by the Senate, comes with the Governor’s own oversight so he is expected to sign it into law once it arrives on his desk. This is a great step to dismantling ‘gun free’ zones while still allowing private businesses and places of worship to make their own call.

Private property rights are arguably just as important as the Second Amendment. The right for the owner of land to tell those visiting that they may not carry firearms is a fundamental exercise in that ongoing debate.

But, where a building is funded by taxpayers and services all residents, the individual taxpaying citizen ought have the right to determine whether he feels it reasonable to carry a handgun onto the premises.

I feel, as time permits and statistics accumulate, we may yet demonstrate that there is no fear to be had by the populace by a responsible, law-abiding gun owner. It will take time but legislation such as HR 1249 continue to push the envelope.

Previous article: Is It Bad To Dry Fire Your Gun? Next article: Bad Guys Break Into Car, Owner Stops Them At Gunpoint, Bad Guys Threaten To Call Police, LOL