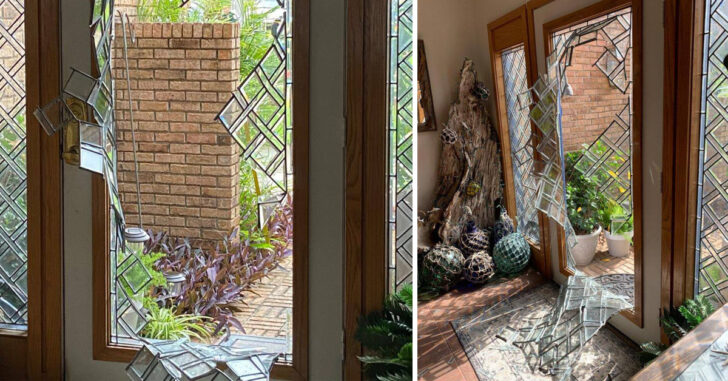 PANAMA CITY, FLORIDA — A man came to the defense of his wife after an intruder broke through their front door and began to attack her.

Deputies arrived at the Panama City home around 6:05 a.m. and found 31-year-old Nathan Jerrell Edwards lying on the floor dead and a handgun on the counter, the Bay County Sheriff’s Office said.

“The husband stated he felt he could not physically stop the intruder, so he went upstairs to get his firearm,” the sheriff’s office said. “He shot the firearm multiple times, ending the threat.”

Edwards was acting erratically outside the home prior to entering, and the husband was standing outside as Edwards came towards him in an aggressive manner.

The husband went into the home through the garage door to get away from Edwards, but then Edwards went to the front door and began beating on the glass, breaking through.

Edwards then knocked the man’s wife to the floor, got on top of her and was beating her, the husband told deputies. The husband said he shot Edwards, who was pronounced dead at the scene.

The man’s wife was taken to the hospital and treated for injuries.

While the husband needed to go upstairs to get his firearm, he was still very successful in defending his wife. It would have been better if a firearm had been more easily accessed by the husband, but no scenario is perfect. We do what we can to be prepared, and this homeowner had a firearm and was ready to use it should the time come.

Edwards, had he been able to continue his attack, could have seriously injured or killed this woman.

An important thing to note is something mentioned by the police department: Upon them entering the home, the found the man’s firearm sitting on the counter in the kitchen. After the threat was stopped, the husband put down the firearm, a good move when police are on the way. You don’t want to be standing there with a gun in your hands when police arrive, if you can help it.

Here’s hoping for a speedy recovery for the wife, and peace for them both after such a terrifying ordeal.

Previous article: LIVE: Chaos In Minneapolis Next article: This Is Why We Covered The Minneapolis Chaos Last Night: Armed Americans Defending Businesses