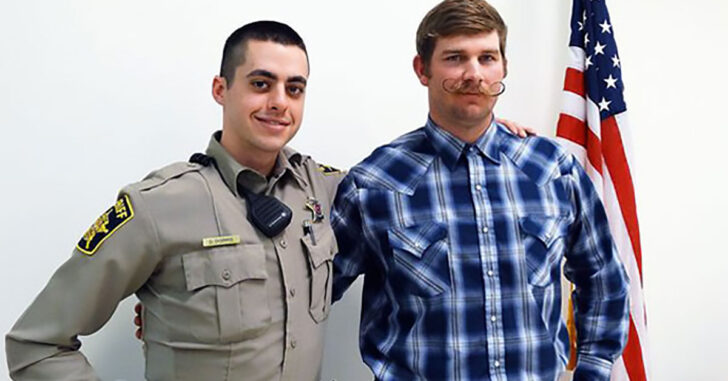 Just before 10pm on January 16, deputy Dorris responded to a call about a man driving erratically with a child in the car. After Dorris initiated a traffic stop, the suspect, Kenton Desean Fryer, 32, drove away.

When Dorris caught up with the suspect at a gas station, the suspect assaulted the deputy and attempted to reach for his gun.

During the assault, Dorris was determined to go home at the end of the night, saying to himself, “Stay in the fight. Just keep fighting, keep fighting. Do whatever you can do, just stay alive. You need to go home.”

Fryer fled the scene, but was later arrested with charges including aggravated assault of a public servant, taking an officer’s weapon, and evading arrest.

Deputy Dorris credits Perkins with saving his life, saying, “I’m alive today because of him … There are no words to explain it. He’s such an outstanding citizen. He’s here for our country, our community.”

Bastrop County Sheriff’s Office will be publicly honoring Perkins for his heroic deed and sheriff’s office spokesperson, Sissy Jones commended him saying “had Mr. Perkins not had his concealed gun on him, that suspect would have likely not paid attention to him … This is a situation where being a license to carry holder truly did save a life.”