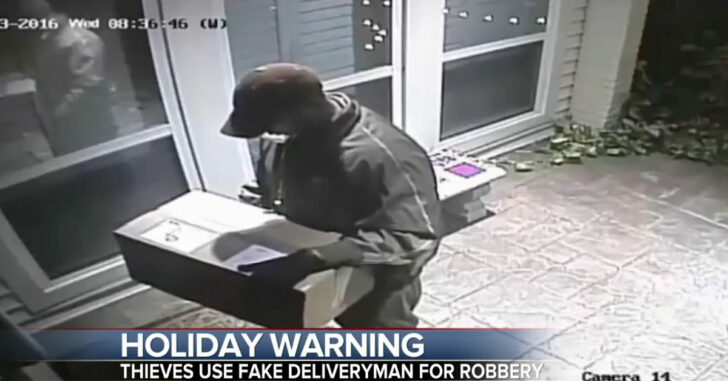 It doesn’t matter if you’ve been naughty or nice this holiday season, there’s bad guys looking to take advantage of your complacency. According to ABC 7 News, there’s a new trend popping up where armed robbers and gangbangers will impersonate a UPS or Fed-Ex driver dropping off a package. Once you open the door, they spring into action.

As covered in ABC 7 Houston‘s account, one homeowner was overcome by four armed thugs after the first one at the door successfully pretended to be a UPS driver delivering a package.

When the homeowner came to the door, a second gunman came into action quickly overpowering him.

They depended upon numbers, complacency, and a homeowner’s basic expectations of decency.

We have to get past this idea that everything is as it seems — especially as gun owners and protectors of our home.

The first sin is letting your guard down.

This is an honest mistake. This homeowner made it and I’m more than sure he rather wish he didn’t. Thankfully, he survived to learn that lesson. We can’t all expect the same. This is a four-on-one ambush with four armed, undisciplined criminals. Here’s the problem with criminals — most of them don’t study firearm safety tips. Simple things like “keep your finger off the trigger until ready to fire” and “keep the barrel pointed in a safe direction at all times” didn’t make the field manual for Criminal Hi-jinx 101.

Here’s the second piece of unsolicited advice: the best time to hit a home is during the holidays.

During the holiday season, most households that looks even reasonably well off are going to either be equipping for two things:

In both of these cases, it’s not even weird for strangers to show up, packages need to be signed for, and a number of other occurrences whereby the person in the home is going to take for granted that the person at the door has good intentions.

That’s why we can’t.

This homeowner had a security system set up over his main doorway. That’s an awesome idea.

We’d suggest setting one up for every major entrance into the home. That’s great for police records and maybe even detecting intrusion while you’re away. However, let’s talk about guns…

If you don’t recognize the person on the other end, make them verify themselves. If anything seems out of place, don’t open the door.

You can be discrete and have it holstered in a concealed manner or have it right visible on your hip. Your call. But have a gun on you.

Lock up guns in a safe if you’re not going to be home.

If you plan on being out for a few days to visit relatives or in-laws, lock up any guns you have remaining in the home. No amount of security guarantees protection but we can guarantee that stealing guns will require an inordinate amount of energy. No thief should be able to waltz into your home, go to your closet, get a gun, and walk back out. Put a chamber lock, trigger lock, put it in a safe, do whatever you feel works best for your budget but make those guns hard to access by unauthorized parties. It’s not hard and you’re making sure bad guys have a harder time getting access to firearms.

Have a great holiday season. Stay safe. Carry a gun everywhere you can.

Previous article: Senior Citizen Fires Fatal Shot At Home Invader With A Gun That Sat Around For 30 Years Next article: Three Intruders Kick Down The Wrong Door, Two Now In Hospital -- Indianapolis PD Reminds Crooks The Price Of Folly