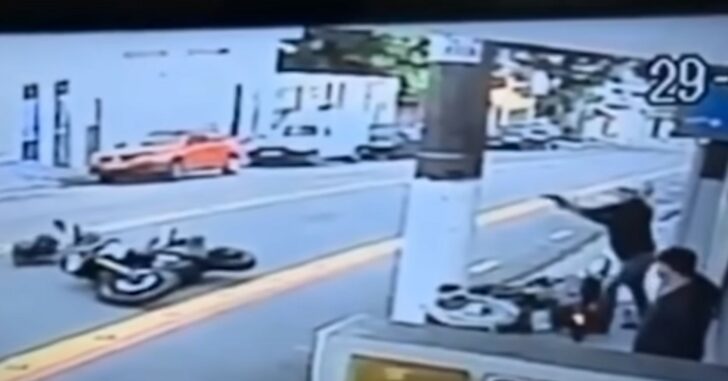 It’s sad to see any loss of life, but it’s also not too bad to witness instant karma in action. Here’s a travel tip if you’re ever in Brazil: If a motorcycle approaches you with 2 people on it, run, because you’re likely about to get robbed.

Sometimes, but very rarely, the target is able to defend themselves with a firearm. Because in Brazil, citizen firearm carry isn’t a thing. At least, not legally.

In the case below, the target was indeed armed and ready to defend, and defend he did. Both robbers ended up not surviving their terrible mistake, and the target walked away to live another day.

By the way, the only reason that this particular target was armed is because he’s an off-duty police officer. Again, citizens aren’t able to carry firearms in Brazil, and that’s one reason why crime is so rampant.

Previous article: Armed Citizen Sets Up Rifle On Bipod, Shoots And Kills Attempted Mass Shooting Suspect Next article: The New Taurus GX4 9mm Is Looking To Compete In The Micro-Compact Category, And It's Absolutely Worth A Look