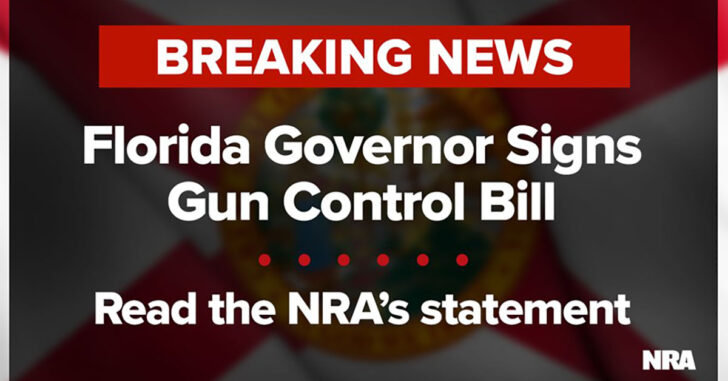 On Friday, Florida Governor Rick Scott signed a bill into law that restricts firearm sales to adults ages 18 to 20, bans bump stocks, imposes a 3-day waiting period on rifles and shotguns, increases school security and allows districts to decide whether or not they want armed teachers on their grounds.

The age change is going to face litigation, as the NRA has already filed suit, saying that it infringes on the Constitutional Rights of those people in that age range.

As far as the 3-day waiting period is concerned, it doesn’t seem like it would have stopped this recent school shooting, seeing as how the gunman purchased the firearm a year ahead of his planned attack.

And while he would have been unable to legally purchase a firearm if the age restriction was in place at the time, I feel it’s likely he would have simply waited until he was of-age to purchase. After all, he patiently waited a year before attacking.

Allowing teachers is the smartest thing about this bill, and we hope to see many teachers and districts taking advantage of this.

As a side note, I moved from New York to Florida because of the differences in gun laws. The Gunshine State is no longer as friendly as it used to be, and this could make way for a slippery slope.

The Governor, who had an A+ rating with the NRA, likely messed up that rating by this action. Here is what the NRA had to say about the Governor and the bill:

FAIRFAX, Va. – The National Rifle Association expressed disappointment regarding the gun-control provisions contained in a bill that was signed into law today in Florida. The new law strips law-abiding adults aged 18-20 of their Second Amendment right to self-protection and imposes unnecessary delays on all firearm purchases.

“This bill punishes law-abiding gun owners for the criminal acts of a deranged individual,” said Chris W. Cox, executive director, National Rifle Association Institute for Legislative Action. “Securing our schools and protecting the constitutional rights of Americans are not mutually exclusive. Instead of looking to the root cause of this premeditated violence, the gun control provisions in this law wrongly blame millions of Floridians who safely and responsibly exercise their right to self-defense.”

The National Rifle Association has always supported measures to increase school security, fix our broken mental health system and keep firearms out of the hands of those with a dangerous mental illness. However, several provisions contained in SB 7026 will do nothing to increase public safety and will only impact law-abiding citizens. Preventing a responsible 20-year-old from purchasing the best tool for self-defense will not stop a deranged criminal intent on committing a crime. Imposing a 3-day wait period on rifle and shotgun purchases would not have stopped any of the high-profile mass shootings in recent years.

“The deranged murderer in Parkland, Florida gave repeated warning signs that were ignored by federal and state officials. If we want to prevent future atrocities, we must look for solutions that keep guns out of the hands of those who are a danger to themselves or others, while protecting the rights of law-abiding Americans.”

Established in 1871, the National Rifle Association is America’s oldest civil rights and sportsmen’s group. More than five million members strong, NRA continues to uphold the Second Amendment and advocates enforcement of existing laws against violent offenders to reduce crime. The Association remains the nation’s leader in firearm education and training for law-abiding gun owners, law enforcement and the armed services. Be sure to follow the NRA on Facebook at NRA on Facebook and Twitter @NRA.

Previous article: FL SWAT Members Who Went To School During Shooting Have Been Suspended Next article: Thug Bangs on Windows of Entire Neighborhood, Gets Free Ride to Hospital