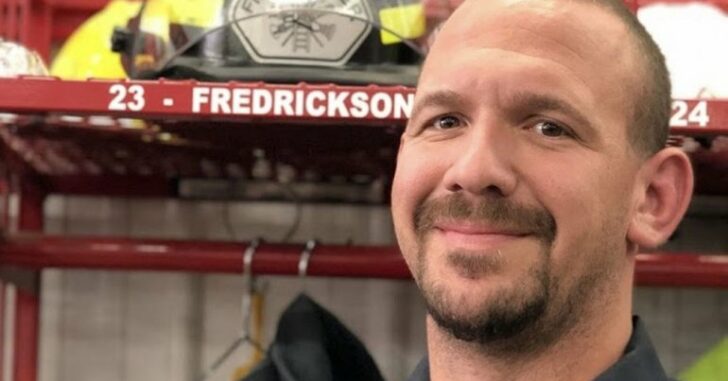 While ammunition exploding in the heat of a fire generally poses little to no risk to bystanders or firefighters, loaded firearms do. Case in point…a firearm that cooked off during recent house fire ground in Willard, Wisconsin, critically injured a firefighter.

Justin Fredrickson, 35, has undergone multiple surgeries, but is expected to recover from the harrowing experience.

Justin Fredrickson was extinguishing a house fire near Sheldon on Feb. 19 when he suddenly felt a pain in his stomach, according to Cornell Area Fire Chief Dennis Klass.

“He was spraying water and he felt like he was hit in the stomach by a two-by-four,” Klass said Wednesday.

Fredrickson, 35, was wearing full turnout gear. He started to remove the clothing, to discover he had been shot in his lower stomach. Because of the gear, there wasn’t much blood visible.

Apparently, a loaded .38-caliber pistol within the house had fired, although no one was inside the structure. The gun had become so hot due to conditions from the blaze it began to fire rounds.

“There were four, five rounds that were fired,” Klass said. The bullets traveled through an exterior wall, including the one that struck Fredrickson. “This is just a freak accident. It could have happened to anybody.”

Fortunately, it appears that Fredrickson will recover.

This story should provides an argument for the NRA’s Three Gun Safety Rules.

#1: ALWAYS keep the gun pointed in a safe direction.

#2: ALWAYS keep your finger off the trigger until ready to shoot.

#3: ALWAYS keep the gun unloaded until ready to use.

Many of us consider keeping a loaded firearm accessible in case of an emergency is “in use.” This incident should provide a reason why we shouldn’t store our guns with a round in the chamber unless there’s a good reason for it.

After all, it’s in poor taste to have your guns cook off and wound the very people trying to save your life, your home and your possessions.

Written by John Boch on TTAG and republished with permission.

Previous article: 10-year-old Shot by Another Child…Police Call It “Accidental” Next article: Fists Can Be Lethal: Man In Vegas Punched Once On Strip, Dies At Hospital