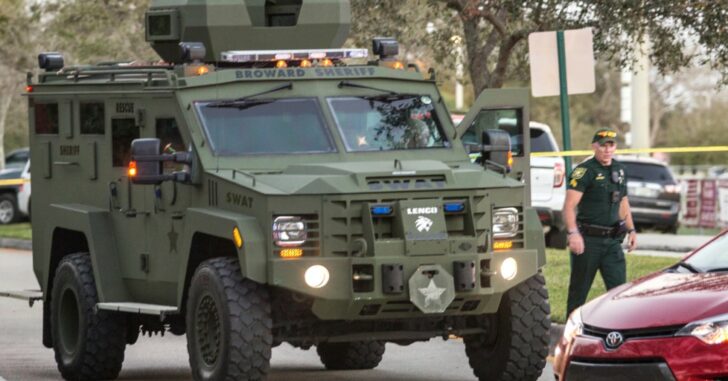 When others would not go into the school while a mentally-ill 19-year-old man gunned down his former classmates inside a Florida high school, two SWAT team members in the area were prepared to defend.

And for their actions, they’ve been suspended.

The detectives’ suspension only applies to the SWAT team, said Rues, adding that they’ll remain on active duty for other assignments.

Miramar’s SWAT team had been training in Coral Springs near the high school at the time of the shooting rampage and was placed on standby after the active-shooter report came in.

The County Sheriff’s Office never requested SWAT. While the team members’ actions were not approved, they certainly were heroic.

“While it may have been a violation of policy to not notify their supervisors that they were going there, their intentions were brave and heroic, I think,” Jeff Marano, president of the Broward County Police Benevolent Association, told the Florida Sun-Sentinel on Wednesday.

When others fail to stop a threat from continuing a deadly rampage, who’s to say that it’s wrong for trained people, recognizing a threat and ready to step in, aren’t able to do so if not given a direct order. Of course a violation of policy by officers is not something that we like to see, however there are times when a split-second decision needs to be made.

What do you think about this story? Should the SWAT members be suspended? Did they cross a line, or should they be praised for the decisions that they made?