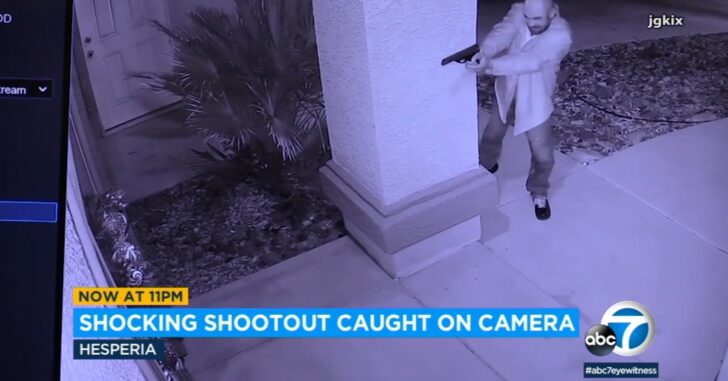 HESPERIA, CALIFORNIA – A man trying to forcibly enter his neighbor’s home was greeted with gunfire early Monday morning. After a brief exchange of gunfire through the front door, the suspect fled the scene.  The entire incident was captured on the homeowner’s front porch security camera.

Family members heard someone trying to break into the home. “I see him – he’s trying to kick the door in, demanding to come in. Then I see him pull out a gun,” the homeowner told a local media outlet.

The man ushered his wife and child into a closet for safety before going to retrieve his gun.  When he returned to the front door, he saw the man outside draw a handgun. With that, they both began firing through the front door, which was still intact. The gunfire exchange was over in less than a minute, ending when it appeared from the video that his pistol malfunctioned. He ran away on foot, managing to fire one last shot toward another nearby home.

Sheriff’s deputies arrived shortly thereafter, eventually locating the suspect and taking him into custody. According to the homeowner, the man was a neighbor, but neither knew the other nor had they had any previous interaction.

The incident left bullet holes in the walls and doors of the home. The homeowner, who was armed with a 9 mm pistol, says that it appears the intruder had a .22 caliber gun, judging from the bullet casings.

The sheriff’s department later identified the suspect as Erick Contreras, 39, a resident of Hesperia. He was arrested and booked for attempted murder, shooting in an inhabited dwelling, attempted robbery, and felon in possession of a firearm and ammunition.

Hisperia, a city of less than 100,000, has had several other incidents in recent years of homeowners shooting intruders, including an early morning incident in May, 2020 that left Julian Robert Sanchez Garcia, 31, of Hisperia dead. There were also home invasions in 2018 and 2017 where the homeowner shot the intruder in self-defense. The homeowners have not been charged in any of the incidents.

Previous article: Victim Shot During Robbery Manages to Shoot Fleeing Suspect, Saving His Life Next article: A New Administration – What Does It Mean For Firearms And The 2nd Amendment?