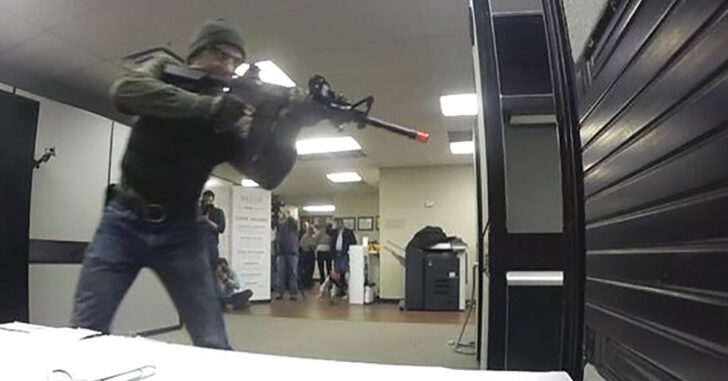 We were going to try and put together the very same concept video after SHOT Show, but it looks like we may not have to now.

A few years ago, a video surfaced that shined every concealed carrier in a bad light, coming to the conclusion that each of us lives in a fantasy world when it comes to effectively defending ourselves against an active shooter. The video, riddled with problems and inaccurate methods of providing real-life situations, needed to be redone in a more realistic way.

Thanks to the news station WFFA, it’s now been done.

The theory is simple: take four licensed Texans with different degrees of training, and give them as little detail as possible about what to expect. The less they know, the more realistic the outcome.

Our “bad guy with a gun” was Shawn Clary, a SWAT team member and tactical instructor with 22 years experience.

WFAA conducted the exercise at a vacant office building near Lewisville. All of the volunteers admitted they were nervous, but eager to see how they would perform.

They all knew they would be involved in three different scenarios in which they would have to encounter an assailant with a gun. Everyone was armed with helmets, goggles and training pistols with plastic pellets.

No other details were provided to the participants. They were not given details about any of how the scenarios would play out.

They were not told Clary would be wearing body armor. That meant in order to kill or wound the assailant, they would have to score a hit to the head, neck, or pelvis.

Watch the video below, which is Part 1 of this series. Part 2 is scheduled to air tonight.

Both scenarios, the office space and conference room, proved one thing: armed citizens can absolutely be an effective first line of defense against an active shooter. We personally didn’t need to see this video to know that, but it’s going to change minds. That’s for sure.

It’s important to note that not every attempt to take out the bad guy was a success, because that’s just a fact of life. No method of stopping the bad guy will ever be 100% successful. The takeaway of this, however, is that armed citizens in the vicinity of active shooting situations can have a huge impact on the outcome.

We’re anxiously awaiting Part 2 and will share it with you when available.

Previous article: Would The NYPD Going 'Smart Gun' Be A Dumb Decision? What If It Happened... Next article: Concealed Carry Applicants Turned Away In Washington -- What A Turn-Out!