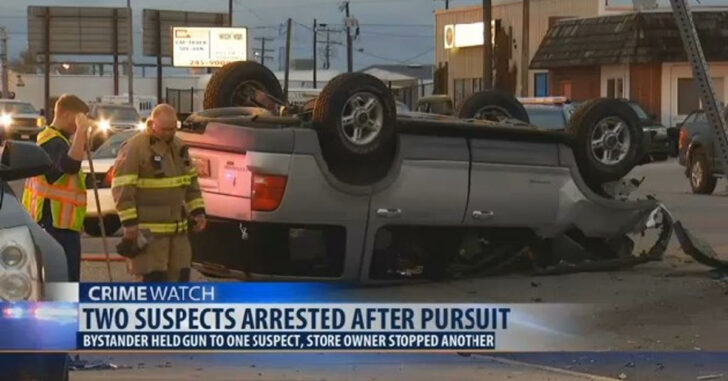 BILLINGS, MONTANA — A high speed police pursuit ended after an SUV carrying three suspects collided with a GMC Sierra on the north side of Billings, Montana. The suspects’ vehicle flipped over and they got out in an attempt to flee the scene of the crime. Two of the suspects ran straight into a law-abiding gun owner who held them at gunpoint until police could arrest them.

According to KTVQ News, the gunowner pursued the suspects and held them at gunpoint. Police arrived and quickly took custody of the criminals. One of the suspects had an outstanding warrant for his arrest and both had non-life-threatening injuries. No shots were fired while they were subdued.

“They started running away until I pulled my firearm on them and put them on the ground,” the gunowner said to KTVQ.

“The firearm made them pretty submissive,” the gunowner said. “As far as I know, they were armed and dangerous criminals. They posed a threat to me, my son, anyone in this area by acting the way they were. So if you can stop that, that’s what you need to do.”

The gun owner noted that prior to their crash, they rolled through an intersection without braking, resulting in a heavy collision with another SUV. The occupants of the hit SUV appear to be in good condition but there was a heightened degree of danger for anyone in the area.

Once held at gunpoint, both suspects complied with the gunowner and he made it clear that they needed to keep their hands visible at all times. One was so shaken as to plead for his life. That wouldn’t be necessary.

A third suspect is still on the loose and authorities are seeking information leading to his arrest.

The Montana Highway Patrol confirmed that it was one of their officers that first identified a temporary plate on the back of the suspects’ Ford Explorer and sought to pull them over. The SUV fled from the patrol cruiser, resulting in a high speed pursuit. That high speed pursuit went through Billings, placing the lives and well-being of those in the area at considerable risk.

Criminals don’t give a flip about bystanders. That’s our problem — and especially if its our family that happens to be in the crosshairs. By the very nature of these bad guys’ flight from justice, they callously risked the lives of those around them. Thankfully, there was a gunowner willing to step up to the plate and subdue two of them. Bystanders came out after the vehicle flipped and it just happened to be a law abiding gun owner first on the scene and ready to act. Good work, man.