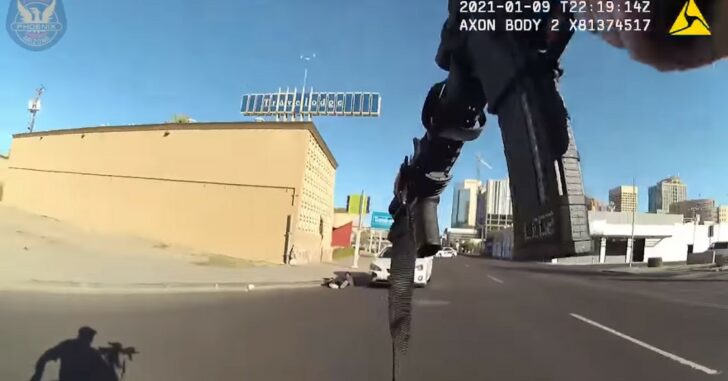 Earlier this month, a Phoenix police officer fired a shot that took down a man with a gun who was holding a baby hostage. The incident began on the afternoon of January 9th in Phoenix. 911 callers reported a man fighting with a woman and running around a hotel with a gun. Video taken from a hotel’s surveillance system shows a male savagely beating a woman in a parking lot then grabbing a small toddler from her.

A second caller, apparently the mother, provided more information to a 911 dispatcher.

“Van Buren. Hurry up! Van Buren and 7th Avenue. My husband just took my baby. He has a gun.  He’s loaded. He took the baby. He’s trying to kill him,” the woman shouted to the 911 call taker. Then you hear gunshots in the background. “He’s shooting!” she continued. “He fired!”

You can hear the fear in the woman’s voice.

The first Phoenix PD car rolled up on scene in about one minute, an impressively prompt response. The man who took the baby hostage was in the middle of the street, trying to carjack someone when police arrived and interrupted that attempted felony.

From about forty feet away, officers told the hostage-taker, who had already fired at least one shot, to drop the gun. He didn’t. Instead, he fired another shot. That, ladies and gentlemen, was felony stupid on his part. In the end, it would prove the last shot the hostage-taker fired.

Another unit rolled up and an officer dismounted with a police patrol rifle. When he saw an opportunity, he took the shot. Yes, it was a patrol rifle just like the one nearly twenty million other Americans own.

The offender fell, dropping the baby, but he remained armed. One of the officers ordered the others to “hold it!” However, the officer who took the shot rejected that command.

“No!  F*** it.  Get the kid! Get the kid!” he shouted as he sprinted towards potential danger to save the baby.

Watch the video below. The whole thing rates as dramatic, but skip to to the 2:50 mark to see the final lead-up to the end of the hostage situation.

After taking the shot, the officer pick up the crying baby, telling his fellow officers, “I’ve got the kid! I’ve got the kid!” while he runs back to safety. The video continues with the officer trying to comfort the baby, making sure the boy wasn’t seriously injured.

The unnamed officer is a four-year veteran. He deserves both recognition and a commendation for his heroic actions to save the baby from death or great bodily injury.

By John Boch via TTAG and Republished with Permission